We are in the middle of the summer and have already had some stretches of hot weather in Nebraska.  No doubt there is more of that in the forecast.  Believe me, I am not in a hurry to get out and fish hard during the heat and humidity, especially during the middle of the day.  But, I ain’t about to quit fishing either.  So, what is an angler to do?  How can we scratch some fish even during these “dog days” of summer?

First of all, let me dismiss some misinformation about fish behavior during the heat of summer:  To beat the heat, you need to understand what really is going on. . . . There are those who will tell you that the fishing gets tough during the the heat because the fish become lethargic; it is hot and uncomfortable and they just do not feel like feeding.  BALONEY.  Fish are not humans; they do not “feel” or respond to their environment in the same way we do.  Yes, on a hot, humid July evening all I feel like doing is sipping on a lemonaide while sitting in some air-conditioning, but even though I have been accused of thinking like a fish does not mean that they feel the same way.  By the way, they told me, they don’t.

Fish DO NOT feed less during the summer because they are uncomfortably hot.  In fact their metabolism rates increase with the warmer water temperatures and they actually feed as much or more during the summer than they do in any other season of the year!  You have heard some smart aleck anglers say that the fish are always biting, and you know what?  They are right!

It Is All About Predator/Prey

You might get tired of me continually stating how important an understanding of predator/prey interactions is to an angler.  Too bad, I am going down that road again.  I do not believe this can be understated:

Fishing gets tough during the middle of the summer because of the abundance of natural prey that is available to the fish.  With warm water temperatures, the entire aquatic food chain is operating at maximum capacity.  Zooplankton, aquatic insects, small fish and a host of other fish food organisms are at their peak abundance during the middle of the summer.  It literally is almost so easy for a fish to get a meal that all they have to do is swim around with their mouth open!  On many Nebraska waters there are millions of young-of-the-year (YOY) baitfish available for predator fish to eat right now.  When prey is at peak abundance, fish feed for a short period of time, get full, and then are relatively inactive until they feed again.

When there is an abundance of prey, feeding periods will be short, they can be intense, but typically do not last long. Specific fishing strategies will vary from species to species and perhaps from one water body to the next, but one general strategy that will hold true during the summer heat will be to fish prime times, times when fish are most likely to be actively feeding.  Try to identify the best spots likely to attract feeding fish and make sure you are fishing those areas during prime times.  Dawn and dusk are prime feeding times for most species of fish and are times when you should do everything possible to be on the water.  Be on one of your best spots ready to take advantage of a short feeding window.  Fishing after dark can also be good during the summer, but even then do not expect feeding activity to last all night long.  Be aware of other feeding windows, likely low-light conditions, like just prior to the arrival of a summer thunderstorm (just make sure you are safe, watch the lightning and wind!). Fish usually become most selective in choosing prey items when there is an abundance of prey.  Fish are not smart, they have a brain the size of the end of your finger, and I believe when there is an abundance of prey they become so “zoned-in” on feeding on that abundant prey item that the do not recognize other things as potential prey.  When there are a billion 3-inch baitfish to feed on, all they are looking for is another 3-inch baitfish.  A 3-inch baitfish matches their search image.  Your baits better match too.  Try to use baits that match the abundant prey in size, shape, behavior and perhaps color.

“Stand Out in a Crowd”

Having said that, what I am about to say may seem contradictory, but follow along.  You want to “match the hatch” when prey is abundant, but then you want your bait to stand out from the crowd.  You want your bait to look particularly vulnerable; you want your bait to look like a meal easier to catch than the other 999,999,999 YOY baitfish swimming around out there.  That may be accomplished by using a slightly different color or perhaps adding a contrasting color to a bait that imitates the natural prey.  However, I believe it is probably best to make your bait look like an easy meal by making it behave differently.  Speed is one good way to make your bait stand out in the crowd and is especially effective during the summer; predator fish will strike at a bait that appears to be wildly fleeing some perceived threat.  Erratic and sudden movements are another way to make your bait look vulnerable.

Again let me say that I love the variety of fishing opportunities for a variety of species of fish that can be caught in Nebraska.  If you have read my blog for any length of time, you know that my fishing strategies every year target peak seasonal fishing times for different species of fish!  Yes, Nebraska even has species that can offer peak fishing during the heat of summer!  July and August can be great times to take advantage of schooling activity by White Bass and Wipers on many Nebraska reservoirs.  During those months, those open-water predators pursue the vast schools of open-water baitfish, especially YOY Gizzard Shad, and when they push one of those baitfish schools to the surface, there is a feeding frenzy!  That is most likely to happen early and late in the day, but sometimes that activity can last longer.  Even if it does not, it offers at least a couple hours of fast action each day.

Our Catfish species are the last to spawn in Nebraska and that will occur in July.  Catfish fishing will lag during the spawn as the males guard beds and try to convince females to spawn with them.  But, you better believe that Catfish are warm-water fish, and as soon as spawning activity ceases the bite fires right back up.  That usually occurs in August and then lasts into early fall.  Largemouth Bass can offer some consistent action right through the heat of summer on many Nebraska waters.  Again be sure to fish early and late in the day, and for summer Bass, do not forget the top-water baits! I cannot wait for fall, the best open-water fishing of the year.  I am already counting the days.  But, I gotta fish, even now, even during the heat of summer.  Sure, I will take it easy and stay cool during the middle of the day, but there are still some opportunities, especially early and late, and there are still some strategies that will get your string stretched even now.  GO FISH!

LINCOLN – A series of fun and educational activities for all ages is scheduled throughout July at Two River... 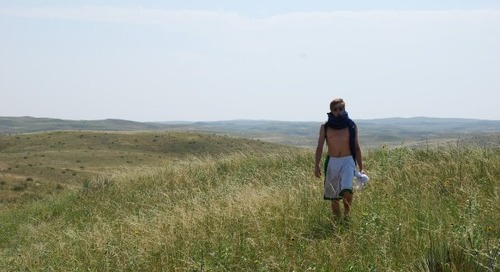 Go Off the Grid in the Sandhills

“There is delight in the hardy life of the open.” – Theodore Roosevelt. My, my we are all are so reliant on...