Plants are green. In school, we all learned about photosynthesis, the ability of plants to convert sunlight to food using green chlorophyll in their leaves. It’s one of those foundational ideas upon which we’ve built our understanding of the world.

Well, as it turns out, the world is a pretty complicated place, and there are some plants that aren’t green and that don’t even photosynthesize. One of those is a crazy-looking plant called dodder that grows across much of Nebraska. If you’ve ever seen it, you would be excused for dismissing it as a mass of discarded orange plastic twine.

Dodder is a parasitic plant that pulls nutrients from the host plants it wraps itself around. Because of that ability, dodder doesn’t need to create its own food from sunlight. There are multiple species of dodder, each with its own favorite host plants. Some can be pests on horticultural or agricultural crops, including alfalfa, but the dodder species commonly seen in Nebraska prairies tends to attack sunflower and goldenrod plants.

When a dodder seed germinates in the spring, a long, thin, orange, thread-like plant emerges from the soil and begins to elongate. As it does so, it noses around its surroundings looking for a suitable host plant. If it finds one, the dodder plant wraps itself tightly around its victim, spiraling upward and then reaching out to find other hosts nearby. It inserts tiny projections called “haustoria” into the plants it parasitizes, which extract nutrients out of the host and transport them to the dodder plant. Once a dodder plant is attached to its host, its root withers and dies, and the parasite becomes completely dependent upon the sunflower or goldenrod plants it is attacking.

Dodder is a native plant in Nebraska and has been making its living off of sunflower and goldenrod plants for eons. While it can appear in fairly large patches – up to the size of a double stall garage or so – it doesn’t ever seem to become a major problem for populations of its host plants. After all, dodder can’t live without the sunflower and goldenrod plants it feeds upon. Unless it’s attacking your alfalfa field or entangling your legs as you try to walk through a prairie, dodder should be seen for what it is – an odd, innocuous, weirdly attractive plant that doesn’t follow the rules we all learned about in grade school.  ■ 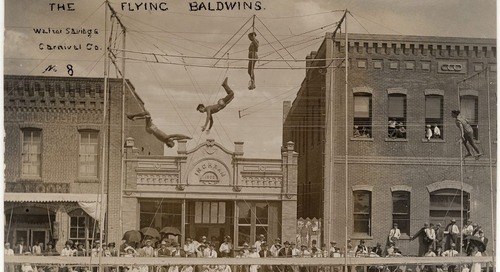 When the Carnival Came to Town

Years ago, the peak of Nebraska summer entertainment came with the Walter Savidge Amusement Company as it p...

Join Game and Parks to learn about catfish fishing Aug. 1 in Lincoln

LINCOLN, Neb. – Learn all aspects of fishing for catfish at the Nebraska Game and Parks Commission’s Discov...