LINCOLN, Neb. – Excitement and anticipation are building for Nebraskans as the Nov. 11 opener of firearm deer season approaches.

Deer populations for 2017 are higher for mule deer and about the same for whitetails. Favorable habitat and weather conditions this past year should provide for good fawn production and good survival of adults and fawns.

“Hunting prospects have improved in all management units as herds are mostly recovered from the drought and disease losses of 2012,” says Kit Hams, big game program manager for the Nebraska Game and Parks Commission. “Mule deer in five southern units are doing very well and whitetails are increasing in several units.”

Nebraska still is recovering from the epizootic hemorrhagic disease (EHD) losses to whitetails that occurred in 2012, and a reduction in whitetail antlerless permits will help with that recovery.

The firearm season closes on Nov. 19.

Deer permits may be purchased at OutdoorNebraska.org or at any Game and Parks permitting office. Other resources for hunters available on the website include: the 2017 Big Game Hunting Guide, the Public Access Atlas, check station locations, and information on participating in the, Hunters Helping the Hungry and Deer Exchange programs. 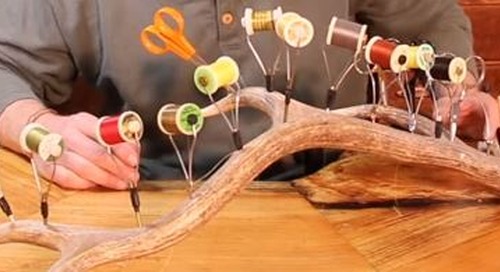 Make your own Tool-Holding Antler

ne day while attending graduate school in Montana, I wandered into the Slide Inn a fly shop on the banks of...