Officer Bryce Streger helped families escape a western Nebraska wildfire and evacuated an elderly couple in the nick of time. Streger lost all of his personal belongings in the fire.

Officer Brian Piernicky responded to an accident near Swanson Reservoir and located and assisted a passenger with critical injuries. The passenger would not have survived without Piernicky’s assistance.

The officers received a standing ovation from their supervisors, peers and from the commissioners.

— approved an easement request from Rural Water District No. 1 in Johnson County to place a water line that will provide water to the shop and other buildings at Osage WMA.

The commissioners also heard several staff updates, including ones on mountain lion population research, pheasant research and the state’s Berggren Plan for Pheasants. 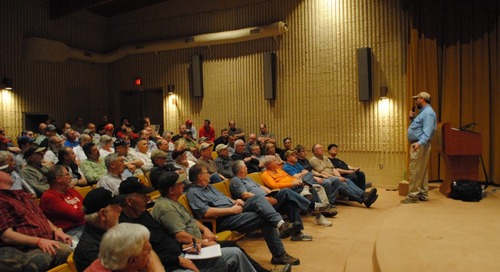 Again I know this news release already went out, but I want to spread the word as widely as possible. Fishe...

LINCOLN, Neb. – A bull elk tag will be auctioned off by the Nebraska Big Game Society (NBGS) on Thursday, A...