LINCOLN, Neb. – The Nebraska Game and Parks Commission voted to delay consideration of the proposed Lake McConaughy Visitor Management Plan at its meeting Jan. 22 in Lincoln.

Instead, Game and Parks staff will work with a McConaughy-area advisory group to come up with revisions to the plan and then present them at the Commission’s March 20 meeting in Hastings.

Game and Parks has worked with local officials, park visitors and the public on the plan to make Lake McConaughy and Lake Ogallala state recreation areas better, safer and more family-friendly. The plan called for controlled beach access and designated camping to help ensure public safety and address over-crowding and over-burdened infrastructure.

“The issues and challenges identified at Lake McConaughy and Lake Ogallala remain,” Parks Division Administrator Jim Swenson said. “The Commission has been tasked by Keith County representatives to address those issues and challenges. We look forward to working with a local advisory group to gain success in restoring Lake McConaughy and Lake Ogallala to quality and safe recreation environments.”

Hundreds of people attended a Game and Parks informational open house at the Lake McConaughy Visitor and Water Interpretive Center on Jan. 16. The agency also has been accepting and reviewing public comments about the plan.

— approved a staff recommendation to remove the North American river otter from the state threatened list, add the sicklefin chub to the endangered list, and add the McCown’s longspur and timber rattlesnake to the threatened list. Also included was a provision that makes the taking of timber rattlesnakes lawful if it is done for the immediate protection of the health of humans, livestock or pets.

– – City of Syracuse, $283,387.50 for Syracuse AquaCenter Bathhouse Renovation and Development;

— approved the Focus on Education Strategic Plan, which conveys the Commission’s desire to develop a leadership role in ecological, cultural and outdoor recreation education in Nebraska.

— approved the Fisheries Tactical Plan for Urban Fishing and Fish Production Needs, which will address the growing needs of fish hatcheries in the next 5-10 years.

— an update on the Venture Parks project;

— an overview of the many agencies the Commission partners with regarding environmental reviews; and

— a presentation on the Trout in the Classroom program, in which 89 Nebraska schools raise trout from eggs. 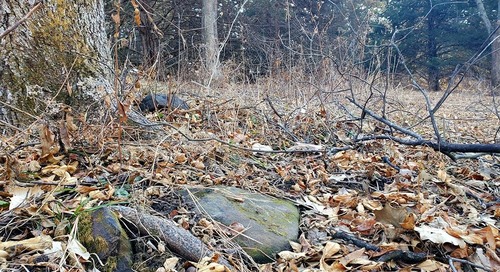 What are those rocks in my deer woods?

The late deer hunting season is over in Nebraska and now it is time for me to unravel a mystery in the wood...