With the onset of cool weather, and presumably sometime soon some actual “cold” weather, since December is just a few days away, my thoughts have turned to “comfort food.” And a major ingredient in comfort food around my house is, of course, wild game. Now there are all sorts of wild critters currently residing in any one of our four freezers (yes, I said “4”), including doves, squirrels, rabbits, various kinds of fish, snapping turtle, and lots of venison. So to make room for this year’s deer harvest, I’ve been cooking a lot of venison lately. One of my favorite wild game comfort food meals is venison Swiss steak. I like to slow cook this dish in my trusty crockpot, filling the house throughout the day with its increasingly delicious aroma. But I’m one of those who rarely follows a recipe to the letter – I have a tendency to toss in whatever sounds good or what I have too much of and don’t want to waste, so every time I make something it tastes a little different. In any event, I’ll provide the basic recipe here and encourage you to experiment. First you’ll need some venison steaks. Two pounds of meat is about right. You can always double the recipe if you want more. Sirloins, round steaks or chops will do. I prefer to use “butterfly” steaks that I cut from the backstrap. I split the butterfly completely in two and trim off any connective tissue that may have been holding the two halves together. If your steaks are large, you may want to cut them into smaller pieces, what some folks call “finger steaks.” Next, mix up some flour with salt, pepper and a little garlic powder in a bowl or ziplock-type bag. Here’s where you can do a little of that experimenting – you could throw in some paprika, Italian herbs, Montreal steak seasoning, etc. Whatever you think might add some flare. Dredge the meat in the flour and seasonings, then lightly brown it in a heavy skillet with oil over medium-high heat. The meat should not be cooked through, just browned. Slice an onion and layer some of it in the bottom of your crockpot. Place half of the browned meat on top of the onions, them more onions on top of the meat. Mix together (approximately) 1 cup of ketchup, ½ cup of water and ½ cup of brown sugar. If this amount doesn’t look like it will cover all of the meat, just mix up some more using the same ratio of ketchup, water and brown sugar. Spoon some of the mixture over the meat. At this point I usually toss in some herbs like parsley, thyme and/or marjoram. Add another layer of meat onion, ketchup mixture and herbs. Now set your crockpot on low and cook for at least 6 hours. At the 6 hour mark, I check the meat for tenderness and like to add a quart jar of my home-canned stewed tomatoes and peppers, and then let the dish simmer for another hour. If you’re really feeling “wild,” toss in some sliced mushrooms for the last hour of cooking. The flour the meat was dredged in helps to thicken the sauce to a gravy consistency. Serve with mashed potatoes or over egg noodles. This is a very easy way to prepare venison and it’s a dish sure to give you a big comfort food smile. 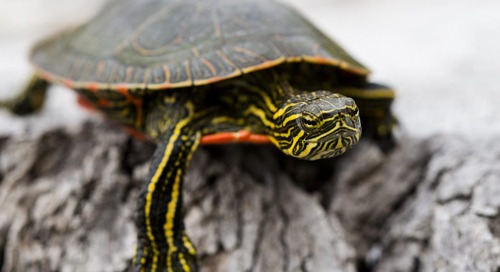 The turtle — a master of wintering

Some of the most common wildlife have the most magnificent capabilities. Painted turtles basking on a log i... 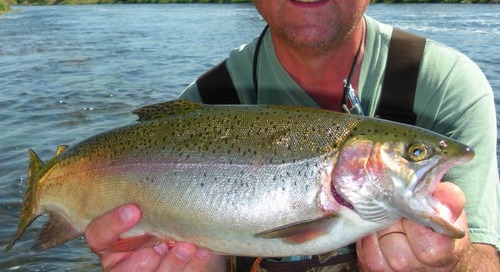 I have never fished for steelhead.  Someday?  Maybe, but not yet. However, as a pointy-headed fisheries bio...