I am always up on a soap-box promoting the diversity of fish & wildlife, hunting and fishing opportunities we have in Nebraska.  With no closed season for fishing and long hunting seasons for a variety of species, it is very possible, and double the fun, to combine the activities!  Fall is one of the best times to do that.

Hunting, fishing, trapping, I love them all and often feel like I have so much to do and so little time.  One of my strategies for doing it all is to try to take advantage of opportunities depending on where I am, weather conditions, hot bites, game abundance, etc., etc.  I do spend a lot of time fishing in the fall, and am likely to postpone most of my hunting efforts until the weather gets colder and some snow starts to fly, but once late fall rolls around, I like to spend some time in the field as well as on the water.

Recently, my family and I spent some time “out west”, back “home”, and the shotguns went with us as well as the fishing gear.  The weather was gorgeous so we still leaned towards fishing, but we spent some time chasing roosters too. Woo hoo!  My son with one, a single, O-N-E pheasant.  Yep, that is all I have to show you.  I know the negativity some of you are thinking right now, I hear it all the time.  Let me make some comments. . . .

Are pheasant populations in Nebraska what they used to be?

Nope, not even close.

Seriously people, it ain’t hard to figure out.  “Habitat is where it’s at”!

I ain’t even that old and I can tell you habitat conditions now are nothing like they used to be!  I tell my son and nephews “old man” stories about how it used to be, and most of that includes how the habitat used to be.  I can remember a time when we hunted pheasants in corn fields AFTER they were picked.  Nowadays, you are not even going to hunt a mouse in most corn fields after they are picked.

In spite of that, there are still parts of the state, and can be pockets all around the state, where there are good numbers of pheasants.  We hunted in southwest Nebraska and there are birds out there.  Nope, on this trip I do not have pictures of limits of pheasants we killed.  While we were there, the weather was warm and dry–tough hunting conditions.  In addition, we still found there were fields where the corn had not been picked.  Believe me, there were numbers of roosters, cackling, laughing, at us from those acres of standing corn.  We will be back.

We found a few quail too; my nephew managed to collect one of those.

I will not talk about my shooting.  I shot poorer than I have in a couple of years.  No, I did not do my part.  Sorry.

So, if the weather is going to be bluebird-nice, and it was, and I cannot hit what I am shooting at . . . might as well go fishing!

Over the years I have blogged often about the trout fishery available in Lake Ogallala and associated waters downstream of the lake (i.e. the canal and North Platte River).  Those waters have and continue to offer some high quality trout fishing.  Given good flows of water, the fishing for trout, and big trout, in those waters can be as good as any that can be found in more famous waters in other places.  The Lake Ogallala trout fishery is a special one in Nebraska, it has been for many years, and I hope it continues to remain that way for many years to come.

I have taken advantage of every opportunity I have had to fish that fishery in recent years, and since trout are cold-water fish, late fall is one of my favorite times to fish there.  This most recent trip was one of our best.  I am not going to tell you exactly how many trout we caught. I will tell you that my son and I had a couple of days on the water that were a couple of our best days for this whole year.  Daniel got two small fish that were just off the stocking truck, but the rest would have averaged around 3 pounds.  Yes, I just said that.  Now you can say all fishermen are liars and you might be true, but we know.

This was one of the smallest, but I laughed because it was shaped like a bluegill. They were beautiful.  Dark males starting to get hook-jaws; silvery, fat females. What did we catch ’em on?  I ain’t saying.  If you want to know, read my blog.  Past blogs over the years have outlined everything you need to know.  However, I will tease you with one more photo.  If you want to do your internet scouting, look close and you can see what was used to catch at least one fish: That bait was hand-tied for me by a friend.  One I have not talked with in awhile; might have to drop him an e-mail. . . .

The fish were all released.  Daniel and I will be back to catch them when they are even bigger.  We will be back after the pheasants too; fried pheasant disappears real fast around our house.

Still plenty of time to combine some open-water fishing and hunting.  After that, we might have to combo-up with some ice-fishing!  I’m there!

Is this a great state or what? 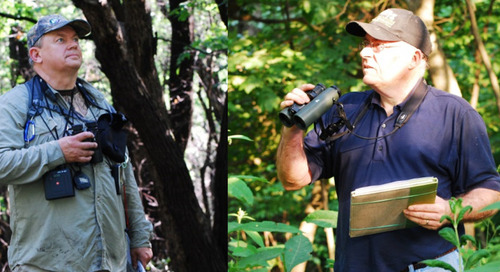 Nebraska has had a spate of rare birds recently.  Some of the highlights include not one but two Harris’s H... 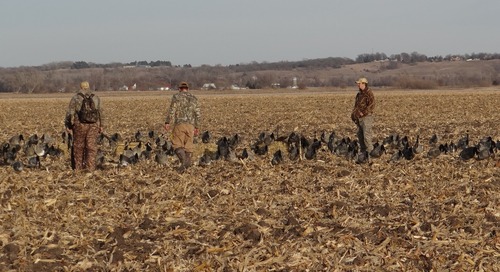 Do  you really need water, pumps, pit blinds, lots of expensive decoys and to be part of a high-priced hunt...