LINCOLN, Neb. – Microscopic young zebra mussels – or veligers – recently were detected in a water sample collected at Carter Lake by the Nebraska Game and Parks Commission. Since no adult zebra mussels were found, the lake will be listed as a suspect water body.

If no adults or additional larvae are found after three years of sampling, the lake will be delisted. The lake will be listed as an infested water body if an adult zebra mussel is found.

Each year, larval sampling takes place twice a month starting in May. Additional samples are waiting to be analyzed. A search for adult zebra mussels will continue on the lake’s boat ramps, rocks and other hard structures.

Carter Lake, located in Douglas County, is a border water and jointly managed by Game and Parks and the Iowa Department of Natural Resources.

The Missouri River has an expanding zebra mussel population along its entire length downstream of Gavins Point Dam. Boats using both the river and Carter Lake are the likely source of introduction. Lewis and Clark Lake, Lake Yankton and the Offutt Base Lake are the only other Nebraska waters that have established zebra mussel populations. Omaha’s Zorinsky Lake is a suspect water body, with one positive veliger sample collected last year.

It is important not to transport any lake or river water, mud, or plant material away from its source as that could transport aquatic invasive species to another water body. Young zebra mussels are too small to see with the naked eye, so they can be transported unintentionally with water in bilges, outboard motors, live wells and bait buckets. Adults can attach to boats, trailers and aquatic vegetation.

Boaters and anglers are encouraged to follow the Clean, Drain and Dry protocol to prevent the spread of zebra mussels. Visit neinvasives.com for details.

A zebra mussel is an aquatic invasive species that looks like a D-shaped clam, with alternating light and dark bands. Most zebra mussels are less than an inch long. They form dense colonies and filter large quantities of plankton from water, decreasing the food supply for native species. Mussels increase water clarity causing increases in unwanted vegetation. In addition, these mussels pollute swimming areas with sharp shells and clog water intake pipes.

There are no effective treatments to control zebra mussels once they have infested a water body other than draining the body to low levels to allow the mussels to dry out or freeze.

For more information about zebra mussels, visit neinvasives.com or read the 2017 Nebraska Fishing Guide. Report any suspected observation of zebra mussels to Game and Parks at 402-471-0641. 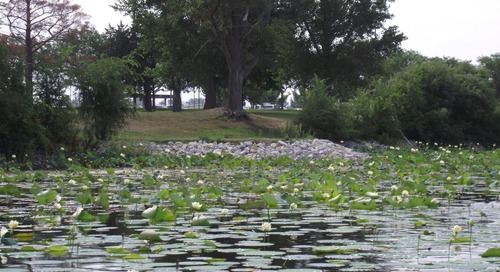 I am afraid we need to spread the word on this as much as possible, as far as possible! Carter Lake listed ...