LINCOLN, Neb. – A second nesting attempt this year by the peregrine falcon pair atop the Nebraska State Capitol Building in Lincoln has failed.

The latest nesting attempt began near the end of May, when the female peregrine falcon laid three eggs in the nest box located on the Capitol’s 18th floor. Over the past week, two eggs disappeared, leaving one egg attended by the pair. By late Monday, June 25, the pair was incubating the remaining egg infrequently, and by the following morning, neither adult was present at the nest box.

“Based on the circumstances, we can conclude the remaining egg will not hatch,” said Joel Jorgensen, nongame bird program manager for the Nebraska Game and Parks Commission.

In late April, the peregrine falcon pair selected an alternative nest site in a gutter at the base of the Capitol’s dome. It was not known how many eggs were laid because the nest site was inaccessible, but the nesting attempt failed in early May following a period of rain.

This year’s unsuccessful nesting attempts follow a similar outcome in 2017, when five eggs were laid, none of which hatched. In 2016, one out of five eggs hatched. The pattern of decreasing egg fertility is believed to be associated with the birds’ age. Alley, the female, is 14 years old and the male, 19/K, is 17 years old. Maximum longevity of peregrine falcons is 16-20 years. 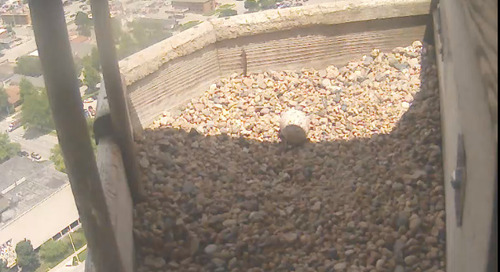 Within the last week the Peregrine Falcons’ second nesting attempt for the year seemed to be headed down a ...