Do you have dream hunt you like to do someday? You know what I mean … a hunt you’d like to complete before you “kick the bucket?”

Perhaps you have compiled a bucket list of hunts.

Maybe you can’t afford a grandiose adventure to a far away place for exotic game but would like to stay closer to home to accomplish a memorable hunting experience.

If you are looking for some ideas about Do-It-Yourself (DIY), value-driven bucket list hunts that can be done in Nebraska, you’re in luck! Because, eleven of us avid hunters at the Nebraska Game and Parks Commission have shared our vastly different bucket list hunts for your consideration on the agency’s website at this page.

From the rolling plains of eastern Nebraska to the plant-anchored dunes of the Sandhills to the rugged buttes and mesas farther west, there’s a lot of scenic terrain to hunt for a wide variety of game species in the Cornhusker State. And, this is reflected in our bucket list.

I must say that I really enjoyed reading each and every one of these suggestions and so will you! My work compadres gave me some super ideas for future hunts, especially Eric Fowler’s bull elk hunt. Thanks, “Big E!”

Next up on my bucket list of hunts, hopefully, is that Nebraska bull elk hunt, when I build up enough preference points to draw a permit, that is.

“In Nebraska?” That’s what many people will say when I show them the photo of the bull elk I harvested in the Pine Ridge in 2007. Not only does Nebraska offer elk hunting, more than 80 percent of the hunters with bull tags harvest an elk, and most of the bulls can truly be considered trophy-class. Sure the odds of drawing a permit are long, but it’s like the lottery: Someone has to win.

As I recall, I was fairly calm as I lay on that hillside in northeastern Dawes County, waiting for a bull elk I’d just spotted to walk from behind a rise and present a clear shot. Considering I’d waited 12 years to draw that permit, and that I’d missed an opportunity from the same hillside five days earlier, I’m surprised I was. After the shot … now that was a different story. I was shaking and my heart was pounding. Days of scouting, walking, glassing, calling and watching elk, mostly on the wrong side of the fence, had paid off. My once-in-a-lifetime hunt was over, and I had a beautiful bull to show for it.

Below is the bucket list hunt I offered on the web page.

Fall or spring wild turkey hunting in southwest Nebraska is unique because you are able to potentially harvest birds with the feather coloration of all sub-species and/or their hybrids found in Nebraska – Rio Grande, Eastern and Merriam. Turkey populations remain abundant in the region, and we have an array of public hunting lands available. According to our Game and Parks surveys and reports, some of the better ones include the upper portions (wildlife management areas) of our southwest reservoirs, and the Open Fields and Waters Program walk-in lands in southeastern Lincoln County. Although there are good opportunities on public areas to harvest turkeys, hunters should not be afraid to knock on doors to gain access to private land as well. There are lots of turkeys, and many landowners that don’t mind turkey hunters.

To me, as a longtime sportsman, this is a very special hunt due to the fact that in almost any given flock I have witnessed the widest variety of feather coloration ever on wild turkeys! It is so interesting to see! Where else in North America can this blend of wild turkey sub-species be experienced?

Another intriguing bucket list hunt to check out is John Laux’s prairie grouse hunt in the Nebraska Sandhills.

Prairie grouse hunting in the Nebraska Sandhills is truly a unique experience and should be on every upland bird hunter’s bucket list. As the name implies, the Sandhills are a large expanse of grass-covered sand dunes that represent the largest contiguous block of native prairie remaining in North America – a true stronghold for both greater prairie-chickens and sharp-tailed grouse.

A Sandhills sunrise is tough to beat while watching your dogs comb through an endless expanse of native prairie. To me, this is very unique because this is one of the only places in Nebraska where you can park the truck and walk for miles on public lands in pursuit of upland birds. Several large tracts of federally-owned lands provide great opportunities on thousands of acres – perfect for a DIY (Do-It-Yourself) hunt. In the central Sandhills, you can often run into both prairie grouse species on a single walk. 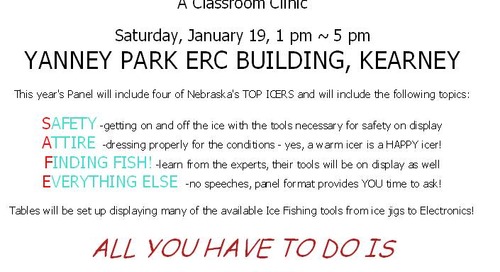 At Least I Can Talk Ice-Fishing

Due to the lack of safe ice, my season certainly has been less than what I hoped for so far.  However, that... 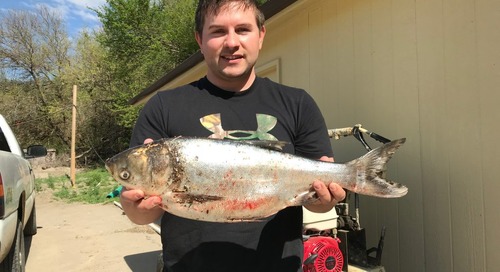 Time again to look back and give an “annual report” on the state record fish that were registered last year...