To accommodate construction, the Martin Bay Bayside Boat Ramp and Beach Area No. 3 temporarily will be closed to the public until early 2022. Boaters in that area will be able to access Lake McConaughy from the Martin Bay Low Water Boat Ramp, which will open to the public at the same time of the temporary closure.

While reservations for campsites in Beach Area No. 3 will be closed, beginning Aug. 16, 40 campsites have been added to other beach areas to continue providing overnight beach camping opportunities for guests. Construction also will take place at the Cedar View Bayside Boat Ramp, which was taken out of service in early August due to low water levels.

Additionally, the Martin Bay Campground temporarily will close to the public beginning Sept. 8, to accommodate the project.

The project will improve boating accessibility and create one of Nebraska’s first motorized water trail systems at the state’s largest reservoir. It is being constructed by Myers Construction Inc. of Broken Bow, and designed by Felsburg Holt & Ullevig, with offices in Nebraska and Colorado.

A motorized water trail is a marked route on navigable waters for recreational use. Improved boating access sites, once completed at opposite ends of the reservoir, will be the first element of the motorized water trail and will continue to promote the western Nebraska recreation area and reservoir as a prime travel destination for boaters from around the Midwest.

• accessible parking added to the existing lot, which also will get repairs and striping; and

• an extension to the existing boat ramp;

• surface repairs and striping for the existing parking lot;

• an exit lane at the top of the ramp to improve traffic flow; and

Both projects are expected to be completed by summer 2022, and the areas will be closed to the public during that time. Originally slated to begin in late 2020 and early 2021, the project was delayed due to high water levels.

Should access resume earlier, Game and Parks will provide notice at OutdoorNebraska.org and through the media.

Additional closures will be announced for the Martin Bay area in September, when construction begins on a nearly $3 million expansion and improvement of the Martin Bay Entrance, which proposes to build two new entrance kiosks, expanded stacking lanes and related utilities. That project currently is out for bid and will begin later this fall.

The improvement projects are being funded with a combination of the Game and Parks’ Capital Maintenance Fund and park user fee revenue, in partnership with matching federal funds provided by the U.S. Fish and Wildlife Service Sportfish Restoration Fund and the Federal Highway Administration’s Recreation Trails Program along with the State Recreation Road Fund.

It is the latest in the continuation of Game and Parks’ Lake McConaughy/Lake Ogallala Master Plan, a 20-year outline of enhancements developed in concert with local stakeholders. Since its inception in 2016, nearly $6 million has been invested in repairs and developments at the reservoir and recreation area, funded largely by the Commission’s Capital Maintenance Fund, park revenues, the Nebraska Department of Transportation Recreational Road Program and Keith County Visitors Committee tourism grants. 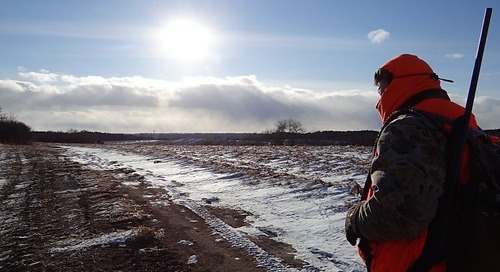 We are in the “dog days” of summer. Ears of sweet corn have already been harvested. Elderberries are ripe. ...