One shutter-button press at a time, the bird photos add up.

What the Nebraska Panhandle may lack in diversity of bird life when compared to eastern Nebraska it more than makes up for in its varied landscape. That variation, from the towering sandstone buttes through the pine forests, sandhill lakes, riparian woodlands, grasslands, croplands and even residential areas, is home to a diversity of birds, and some bird-watching gems found nowhere else in the state.

Joel Jorgensen, nongame bird program manager for the Nebraska Game and Parks Commission, said many birdwatchers from the east are often attracted to the Panhandle to see western specimens such as the red crossbill or pygmy nuthatch.

“You have a number of western species that creep into the far western part of Nebraska and that makes it attractive to a lot of birders,” Jorgensen said. “Places like Sowbelly Canyon, Monroe Canyon and the Oglala National Grassland harbor a lot of species not found in other parts of the state.”

Birds deserve a lot of credit for making me a wildlife photographer. When I invested in a 500mm lens about a decade ago, I took to the field to photograph any wildlife species that crossed my path. Admittedly, my knowledge of birds was extremely low and my original goal was to capture the superstars of the Panhandle’s wildlife scene: elk, bighorn sheep and swift fox, to name a few. The birds, though, kept me shooting. When other animals eluded me, I could count on a red-winged blackbird or red-tailed hawk to save the day and pose for an image or two. Often, I would not know the species I was photographing until a bird expert would patiently help me with identification.

Those early bird photos, as much as anything, led me to the career I have today. The birds still keep me shooting. And learning.

Just for kicks, on a cold day this winter, I compared my images in the Nebraskaland database with a checklist of more than 230 species produced by the U.S. Forest Service: “Birds of the Nebraska Pine Ridge.” Memories flowed one-by-one as I checked the boxes.

While many of the photos were shot from a blind, many others were captured while I was just going about business doing other things, whether it be the loggerhead shrike I photographed during the solar eclipse or the rare-to-the-area winter wren that struck a pose while I was hunting turkeys.

When making checks, I counted only the images that I thought were good enough for print and therefore uploaded to the magazine’s database. The snowy owl that I observed numerous occasions this winter but remained a little too elusive for a passable photo? Sadly, no X in that box.

The tally of species: 99. Not quite half of the list, but a gratifying start. It has become something of a goal to get as many species on the list as possible, and I will keep chipping away. Certainly, much of the “low-flying” fruit has been harvested and the remaining species will be more of a challenge. Who knows? Before I hang up the camera, maybe I can get them all. If not, I will certainly be thankful for the ones that flew my way.

LINCOLN, Neb. – Enjoy a day on the water at one of Nebraska’s best boating destinations, Lewis and Clark St... 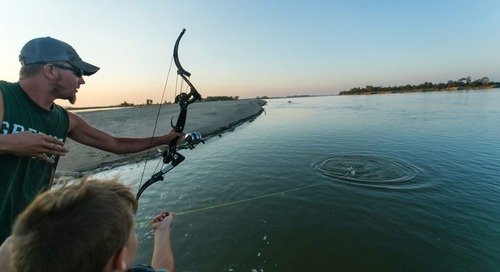 Nebraska’s public waters have enthralled me for more than 30 years. I first picked up a bow in 1988, and ve...