South Dakota State University joined the Nebraska Game and Parks Commission in capturing and processing a total of 44 sheep Thursday, Friday and Saturday — 28 in the Wildcat Hills near McGrew and 16 at three locations in the Pine Ridge near Chadron and Crawford.

Wildlife professionals have ramped up monitoring efforts in recent years to combat disease issues with Nebraska’s bighorn sheep, the most notable malady being Mycoplasma pneumonia. All captured sheep were released on site.

The sheep that were released received new tracking collars and ear tags, in addition to undergoing a series of tissue samples and vaccinations. The ewes in, both the Pine Ridge and Wildcat Hills were not only fitted with new collars and tags, but also with vaginal implant transmitters. The latter devices, which employed the past two years in each region, signal exactly when ewes give birth so researchers can put temporary tracking collars on lambs. The capability to closely monitor the lambs helps identify the cause of death for any that perish in their first months of life.

A team of about 50 people were involved with the project and its preparations. The team consisted of personnel from Game and Parks, South Dakota State University, Omaha’s Henry Doorly Zoo, the Lincoln Zoo, U.S. Department of Agriculture Animal and Plant Health Inspection Service, Nebraska Department of Agriculture, and the Alliance Animal Clinic. Chadron State College students also joined the effort in the Pine Ridge. Funding and support for the project has come through Pittman-Robertson Federal Aid grants, the Nebraska Big Game Society and chapters of the Wild Sheep Foundation. 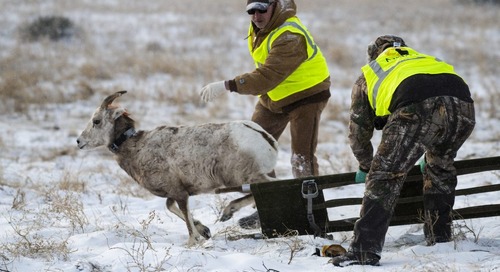 LINCOLN, Neb. – The Nebraska Game and Parks Commission is now accepting grant applications for 2020 to prom...