Those that know me know that handgun hunting is my passion.  I would rather use a handgun than any other method of take for small and big game.   I think this started from days when my Dad would take me to the farm for an afternoon of plinking with our 22 LR pistols. We would also watch old westerns movies that made me dream about riding the range with a six-gun on my hip! Those days had a huge influence on me.  I became very proficient with a pistol and small game hunted with them.  Such an adventure is fun, challenging and personally rewarding.   The successes I have had over the years with a pistol are forever etched into memory and comprise the stuff I dream about at night.   You might say I am hooked…

I talk with a lot of hunters who say they would really like to get into handgun hunting for deer the next season.  They know that such a venture will add a new spark to hunting for them.   Here are a few tips to get you started.

While this is really personal preference, one needs to decide what they want the handgun to do.  Are you needing a sidearm for field carry, close range work or a handgun that can reach across the field to take a deer?  Trying to force one to do the other will likely result in frustration.

My personal favorite is the single action revolver.  These take me back to a time of cowboys and rough trails.  Having grown up watching the Duke create western magic on the big screen, these “cowboy” guns hold a special place in my heart.  They are also perfect for the job.  In 41 or 44 Remington magnum, properly loaded 45 Colt (my personal favorite), 480 Ruger or 454 Casull, they are more than enough gun to ethically harvest any deer that walks in Nebraska.  These cartridges also meet the minimum energy requirements in Nebraska  having over 400 ft-lbs at 50 yards.  They represent a lot of power in a small package.

The double action pistol is also a great choice for the hunter.   Having hunted with a pistol for over 20 years, I can find no significant advantage of the double action other than they are easier to load and load with a cylinder that swings out.   I cannot recall a time where I would have ever fired a revolver using double action mode at game.  They are however, strong guns that will serve the hunter well.

I usually like my revolvers with open sights.  That is a personal preference.  For me, revolvers are a 50 yard proposition.  I hunt with them because they are handy and fit well into a good leather holster on the hip.  This allows my hands to hold a walking stick which will double as a shooting aid.  It also helps me navigate rough terrain, of which we have plenty in Nebraska.  I also prefer shorter barrels as this makes carrying them much easier.   Some hunters like the longer 7 -10″ barrels and that works excellent too.   Find what YOU like and enjoy.

Single shot handguns offer the hunter an incredible increase in power for taking game at rifle distances.  Several can be chambered in rifle cartridges such as the 35 Remington, 375 Winchester, and 308 Winchester, 7/30 Waters and 30/30 Winchester.   They are a handful but easily mastered with a bit of time spent burning powder.    These handguns beg to be scoped.  Properly equipped, they are capable of rifle like accuracy beyond 200 or more yards.   These handguns also require a good rest for accurate shooting. They are simply too big and bulky for the average person to shoot them offhand.  These guns really shine with barrels that are 12-14″ in length as it takes more barrel to burn these rifle powders.

Practicing is key with any shooting but incredibly important with handgun hunting.   They require patience and skill.   As a rule, limit shots with open sighted revolvers to 50 yards or less or the longest yardage you can consistently place four out of five shots into a 6″ circle.   For scoped handguns,  especially single shot handguns,  the range may be extended based on the gun and your abilities.   It is not uncommon to be capable of anchoring deer at 200 yards or longer with such a gun and proper skill.   A rest for any handgun is critical in my opinion.   I like a walking stick that serves this role well.

For new handgun hunters, I recommend starting with a good .22 LR pistol.  Small game hunting is a great way to ease into handgun hunting as they are an incredible challenge and tons of fun to chase with a pistol.

One of the great advantages of handgun hunting is their ease of carry.  Whether a bandolier over the shoulder or a good leather holster on the hip (my favorite) they are handy.   They also represent a safe way to carry a firearm in the field.   Other methods include pistols tapped for a sling and carried over the shoulder.   Whatever your method, make sure the gun is secure and unable to fire until you intend to.

Handgun hunting is what keeps me up at night.  The thrill of chasing deer in the woods with a good single action on my hip is exhilarating.  Taking to the trail with a walking stick in hand and pistol in leather takes me back to  a different time.    A place where cowboys rode the trail, and heroes were just naturally made.   Where hunting was simply a way of life and a good pistol was an important tool.   I often think about those late nights with Dad watching the Duke ride the wide open range under a cowboy hat with six-gun on the hip.   Those times with Dad were fun and meaningful.  That feeling comes with me each fall when I head to the woods, six-gun in hand.

LINCOLN – Visitors to seven state recreation areas will be allowed to touch off fireworks on Independence D... 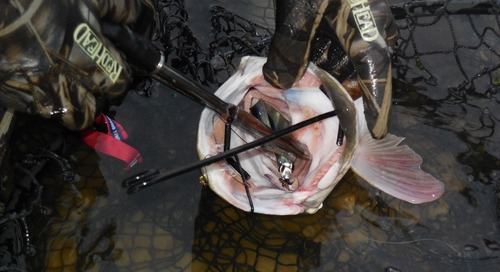 I was going to blog about something different today, but I just heard some talk about hot Walleye bites on ...