Never in my outdoor life have I ever endured so much negativity, so much criticism, and taken so much flak for an action.

It all was the result of a photo and video I shared recently on my personal social media accounts. Both were of a large, master angler-sized flathead catfish that I caught in an eastern Nebraska sandpit lake and then duly released back into it.

Here are the photo and short video clip shot by my fishing partner, Rich Berggren of Waterloo, NE. Well, that’s what I thought, too.

Boy, was I wrong. Dead wrong!

Surprisingly, a number of anglers, and even non-anglers, were shocked, dismayed and downright mad that I didn’t keep and eat that behemoth. I received some pretty nasty personal attacks regarding not cutting up that flathead catfish for the dinner table as well! No worries though, I’m used to negative feedback, however harsh.

Don’t get me wrong, I also garnered plenty of positive comments about the release of that whopper.

But, seriously, did any of you naysayers even read my recent blog post on why big catfish should be released?

This is the link to it, if you’re interested: Give CPR to Big Catfish.

I still cannot comprehend why I would be criticized for doing the utmost of a ‘conservation thing,’ and properly releasing that big flathead catfish to swim and perhaps  spawn another day, or to be landed by another angler.

Do you know how old that fish probably was? Old, by fish standards. My gosh!

For me, catch-and-release fishing has become ingrained. It has made the love of the chase okay, motivated by what I call an “eco-conscience.”

Noted anthropologist Matt Cartmill says catch-and-release fishing done accurately makes us feel good about our genorousity of spirit  in giving a worthy adversary another chance at life. It’s management as morality, he adds.

As a conservation professional, I view myself as a role model, and hopefully, a decent one. I have made an effort to teach appropriate behavior and show correct practices in helping the future of our fisheries. Proper catch-and-release fishing fits directly into these principles, especially when it comes to larger fish, trophy fish.

Maybe we need to go a bit deeper on this issue.

Let’s look at the flathead catfish, Pylodictis olivaris, from a biological standpoint, and why the bigger ones should be put safely back in the water.

According to the Iowa Department of Natural Resources (DNR),  as a further incentive not to kill and consume large flatheads, this long-lived and fish-eating species can accumulate contaminants in its flesh at greater levels than shorter-lived fish that feed lower in the food chain.

Consider what Doug Stange, one of the nation’s premier catfish anglers, and Larry Cofer, a fisheries scientist, both of whom write for the popular In-Fisherman Magazine, have to say about not keeping large flatheads. They both concur that smaller, sweet tasting catfish usually are younger fish and therefore harbor fewer contaminants, another reason to keep small fish and release most larger fish. Some contaminants, they readily admit, also are bound in greater quantity in the fattiest parts of catfish—the prized belly meat and the reddish meat on flatheads. The two believe most large flatheads should be released to continue to thrill anglers.

Another factor the Iowa DNR points out is that the flathead catfish is also something of a lone wolf: a single clump of cover will often yield only one, or at best just a few large individuals most of the year. Thus, over-harvest of big flatheads in certain waters can be an issue.

Enter Daryl Bauer of our Nebraska Game and Parks Commission’s Fisheries Division, on big flathead catfish and why to return them to the water in which they live.

He states: “With the relatively slow growth rate of flathead catfish in a northern state like Nebraska, it takes several years, or maybe a dozen years or more, to grow flatheads larger than 34 inches. At Branched Oak Reservoir (near Raymond, NE) where it is all catch and release on flathead catfish to help control white perch populations, just imagine how many of those flatheads would be present if harvest was allowed?”

Big fish are hard to catch, Bauer emphasizes, not because they are smart, but because they are rare. “Flathead catfish are so long-lived, that over-harvest can cause damage to the population and may not be seen for many years and recovery could take decades.”

“Catch-and-release fishing on larger flathead catfish works,” Bauer reinforces. “Starting in 2010 our fisheries biologists began putting tags on Branched Oak flathead catfish larger than 10 inches.  The numbers of tag returns from those flatheads at Branched Oak has increased each year as more fish were tagged and anglers were more aware of reporting their catches of tagged fish. At least two of those tagged flatheads have been caught and released by anglers multiple times. One was caught twice by two different anglers while another has been caught and released three times by the same angler!

Back in 2001 researchers from the University of Nebraska-Lincoln tagged some flathead catfish at Branched Oak Reservoir. One of those fish was recaptured by an angler in 2012. In 2001 when it was originally tagged it was 18.5 inches long; when it was recaptured in 2012, its weight was estimated at 20-25 pounds–a fish of probably about 35 inches.

Bauer concludes: “I believe we have about as high a density of large flatheads in Branched Oak as you can have in a reservoir with an all catch-and-release fishing regulation, and, at that, there is still less than one big flathead per water acre. Keep in mind that flathead catfish are predators, the biggest, baddest fish predators that swim in many Nebraska waters. As such, any body of water can support only so many of those apex predators. They are indeed a precious resource, and they should be rightly released!”

You need to know that I do not condemn anyone who legally obtains fish to eat. So, why would you have a gripe with me, the guy who lawfully performs CPR (Catch, Photo and Release) with big fish? After all, I am thinking about the future of a fishery by selectively harvesting catfish, where allowed. Why would you “call me out” for taking a quick photo of that massive “flattie” and properly releasing it so it can remain there for you or others to catch and so it can produce more catfish for your children or grandchildren to land?

Flathead catfish are the only species in their genus, and appear unchanged from the middle Miocene epoch 15 million years ago. I want them to be around for at least another 15 million years. How about you? 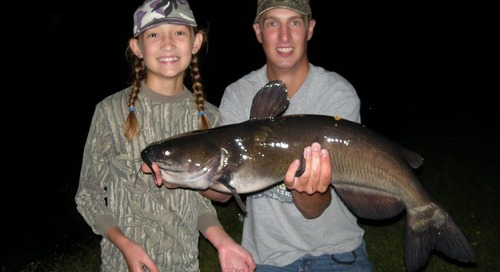 I really have nothing to add.  Hope you get out and make some memories this weekend! The post Protecting Me... 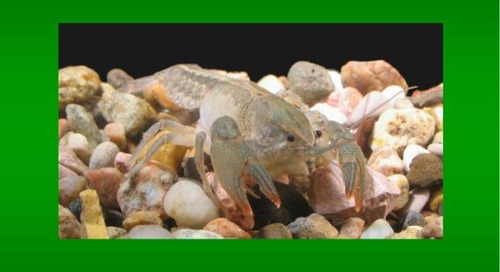 A couple weeks ago I had a little fun with a story I read about researchers getting crayfish drunk, And Now...