Home » NEBRASKAland Magazine » And the falcon’s name is…..
× Share this Article

And the falcon’s name is…..

With more than a thousand total votes cast, the winning entry of our name-the-chick contest is “Dinan”. The name honors John J. Dinan, former Nongame Bird Program Manager at the Nebraska Game and Parks Commission.  John was instrumental in initiating the Peregrine Falcon projects at the Nebraska Capitol and WoodmenLife Tower.  To illustrate this point, we went to the NEBRASKAland archives and found a few wonderful photos of John working on the Peregrine Falcon projects back in the day.  The first photo shows John helping band a young falcon at the WoodmenLife Tower in 1992.   The two subsequent photos show John installing the original Peregrine Falcon nest box at the Capitol in 2003.  The final photo shows John inspecting the nestbox with a camcorder.

John Dinan passed away from cancer at age 51 in 2005, the first year a Peregrine Falcon fledged from the Capitol.  Before John died, he selected the name of the first peregrine Falcon chick that fledged, Pioneer.

Cheri Boardman of Weeping Water and Dina Barta of Lincoln both submitted the name Dinan and are the winners of the 2016 name the chick contest.   Each will receive a modest prize package and the fame and prestige that comes with winning our contest.  Congratulations to both of them!

Dinan, who is on the verge of fledging, is the 23rd Peregrine Falcon raised at the Capitol since 2005 by 19/K and Alley.  Looking back on all the successes over the years, which includes offspring from the Capitol raising their own falcon families in Omaha and Topeka, Kansas, and knowing we are in the latter stage of 19/K and Alley’s long reign, it is fitting to come full circle and recognize John Dinan for his contributions.

Thanks to everyone that participated in the naming contest.

The post And the falcon’s name is….. appeared first on NEBRASKALand Magazine.

LINCOLN – Throughout July, Niobrara State Park will hold a variety of family-friendly events for outdoor en... 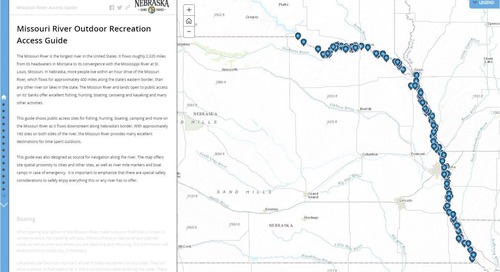 I want to let you know about a little tool we just recently added to our Game & Parks webpage.  If you use ...