LINCOLN, Neb. – The popular Ak-Sar-Ben Aquarium at Schramm Park State Recreation Area (SRA) will close temporarily for renovation beginning May 23. Construction is scheduled for completion in the fall of 2018.

The remainder of the SRA, including trails, canyon ponds, picnic areas, playground and fossil exhibit, will remain open. A temporary office will be established at the park, within the current visitor center parking lot, to accommodate guests who wish to obtain park information or purchase permits.

The renovation, part of the Nebraska Game and Parks Commission’s Venture Parks initiative, will transform the facility into a state-of-art interactive exploration center. The finished facility will include larger aquariums, a redesigned lobby area, a multi-faceted interactive nature center that will include various hands on activities, and a modern classroom to facilitate expanded educational programs and meetings. The Venture Parks initiative calls for greatly expanded activities and amenities designed to meet the needs of a new generation of visitors at four parks – Platte River State Park, Eugene T. Mahoney State Park, and Schramm Park State Recreation Area and Louisville State Recreation Area. Funding for Venture Parks is provided through a public-private partnership, spearheaded through the Game and Parks Foundation and supported by many generous donors.

The new aquarium will feature Nebraska’s aquatic habitats. Visitors will be able to view a diverse array of Nebraska’s native fish species, learn the science of running an aquarium, and stimulate their senses by touching live aquatic specimens in a touch tank. The nature center will focus on the riparian and eastern deciduous forest landscape that surrounds the park site, which is a part of the Lower Platte River Biologically Unique Landscape. Schramm Park is also recognized as one of Nebraska’s best “birding” locations.

Upgrades completed at state park and recreation areas across Nebraska 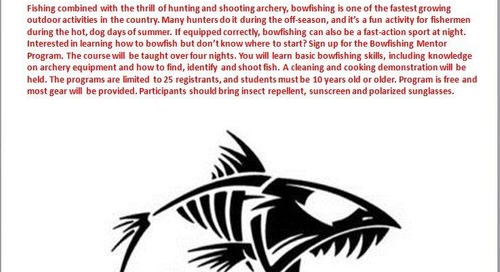 I want to mention an opportunity coming up this summer:  Ever want to learn how to bowfish?  Here is your c...