Adventure Report, Yes, It Is Summer

I have been a few places the past couple weeks, need to give you a little report on what I have been seeing on the water. . . .

I had a couple of evenings on Calamus Reservoir and as is often the case there, on one I got stormed out.  I will fish in about any conditions except when the lightning starts flashing.  I have been on Calamus enough times with thunderstorms approaching to know that when you can see lightning in the distance it is time to be done, no matter how crazy the bite might be.

On the other evening, I can tell you the white bass were going crazy.  Sorry, I did not take time to snap any photos, so you are going to have to imagine the white bass that I caught.  I knew of a couple of spots where fish were being caught, but I wanted to check a couple more–should have known not to leave fish to find fish.  How many times do I have to learn that lesson?  Anyway, I worked back to one area just before sunset and saw the white bass chasing young-of-the-year (YOY) shad to the surface.  It was pretty easy to toss a jig in that melee and hook up.  Admittedly, some of the whiteys were not large, but then again there were some bigger fish mixed in–I caught white bass up to 14 inches.  I suspect there were some even larger wipers in the vicinity, but never hooked up with any in the time I was there.

If you have chased white bass on any of our large reservoirs during the summer, you know what I was seeing–white bass chasing YOY shad to the surface with the water boiling and shad jumping to avoid the hungry predators beneath the surface.  There were no gulls joining the feeding frenzy, but often you will see the birds take advantage of the shad as they are chased to the surface.  Anyway, it is not hard to see that feeding activity and deduce that a person very likely will catch some fish there.  That will happen on many Nebraska reservoirs over the next couple of months.  In fact, white bass fishing on Nebraska irrigation reservoirs during the summer can be as hot as the weather–the fish are actively feeding, relatively easy to find, and can be easy to catch.  However, at times I have been on white bass and wiper surface feeding activity and was frustrated with not hooking up when obviously there were actively feeding fish all around.  I believe in the middle of those feeding frenzies, with the abundance of baitfish, the predators can become selective in what they recognize as prey, especially size-selective.  On Calamus a couple of weeks ago, the YOY shad were relatively small, and I went with small jigs to catch fish.  As the shad grow during the summer, use larger baits.

We often spend our Independence Day holiday with family in Valentine.  That is always one of our most favorite holidays.  You can be sure with a few days in that part of the state, the fishing gear is always with us and my son and I sneaked away from family for a couple of afternoons on the water.

I will always tell you that an abundance of aquatic vegetation in our relatively shallow sandhill lakes can make fishing during the summer more challenging.  By the first part of July, that vegetation is usually near its peak.  So what?  We knew we would have to navigate our float tubes through some thick beds of aquatic vegetation, but guess where the fish were at, especially the largemouth bass? The best part was, in the thick vegetation, the fish definitely were looking up for prey.  Surface baits ruled!

We were hoping for a mammoth bass or three, but did not find those fish in the time we had on the water.  However, what we caught averaged 3-4 pounds and we caught several of them! We encountered several pike too, especially outside of the thickest submerged vegetation, along edges.  Most of those pike were small, and they all were skinny–exactly what I expect on our sandhill lakes during the summer.  Pike are called “northern” for a reason–they are definitely a cool-water fish.  Nebraska’s sandhill lakes are great pike habitats and hold high densities, among the highest anywhere.  However, those habitats are relatively shallow and warm during the summer and pike, especially big pike, need cool-water.  In warm water those pike’s metabolism is literally burning energy as fast as they can take it in; that is why those fish tend to be relatively skinny all summer long.  There is plenty of prey in those very productive waters, but the pike never fatten during the summer even though they are eating all the time.  As waters begin to cool this fall, the pike will be begin to put more weight on their frames. We caught numbers of pike and you can see they were not large, 30+ inches were the largest, but they all were a lot of fun to catch on top-water baits.  I wanted to show the picture of that one small pike I caught as an example of how those fish are consuming prey right now, likely consuming lots of prey.  That fish had a noticeable bulge in it’s stomach, a rounded bulge on both sides.  I am pretty sure a turtle got ate! By the time we had to quit fishing the second afternoon some storms were forming to the south. We did not get stormed out, but made the mistake of fishing down-wind to one of our better areas.  That was not a good idea as we then were faced with a long paddle back up-wind.  We decided it would be easier to slog through the reeds, bulrushes and marsh to get to dry ground and the trail where we could walk back.  That was a workout and I doubt we will get carried away down-wind like that again.

Oh, for you internet scouters, HERE is where we fished in the sandhills.

All fish caught were immediately released, even the white bass.  I have some more activities around the state on the schedule for the coming weeks, and, as always, the fishing gear will be with me.  Stay tuned and GO FISH!

The post Adventure Report, Yes, It Is Summer appeared first on NEBRASKALand Magazine. 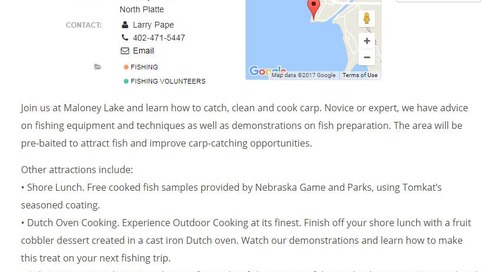 Just a reminder for the weekend, if you are in the North Platte area tomorrow, you might want to swing by L...