The deer harvested by a hunter prompted celebration but other hunters on social media certainly did not think so.

You see, it was a smaller, younger white-tailed buck. It was a beautiful animal and a great photo of the proud hunter and his deer.

However, it did not take long for the naysayers to chastise and ridicule the individual for shooting a basket-racked buck.

A trophy deer is truly in the eye of the beholder. It is personal, very personal.

“For many, the trophies are the memories harvested over years of hunting,” said Jeff Rawlinson, Outdoor Education Specialist and Assistant Division Administrator in the Communications Division of the Nebraska Game and Parks Commission. “Each hunt, characterized by the location, the family and friends we were able to spend time with, that awesome feeling of success … those are real trophies too.”

As long as that deer was legally acquired and the hunter adhered to the wishes of the landowner, I have no problem with what a licensed deer hunter harvests. It is up to the hunter. And, by the way, let’s leave the overall deer management to the wildlife professionals.

You should feel the same way. How much of a deer expert are you? Are you a wildlife biologist specializing in deer research? What if all hunters checked in the same or nearly the same gender and age of deer, huh?

What has deer hunting become? Is it all about huge trophy antlers? Maybe we should place some blame on the outdoor media industry where notable hunters are constantly shooting massive-antlered bucks. Sure, most of us like big bucks and I will shoot one during Nebraska’s firearm or muzzleloader deer hunting season if it presents itself. I am an opportunist though and may take that nub, spike, forked or basket-racked buck on my aunt’s farm, if my permit allows.

A friend of mine once said, “I never measure a deer in inches, only the smiling hunter’s face with the deer in a photo.”

That statement could not be more accurate.

Look, I have heard all of the arguments about what a hunter should or should not take.

“You shouldn’t have shot that buck; imagine what he could have been next year!”

“Why didn’t you let that deer walk so it could have grown another year!”

“If you wanted meat, why the heck didn’t you just shoot a doe?”

Rawlinson emphasized, “Everyone seeks something different from hunting. Every harvest represents effort made by a hunter, time with loved ones, time outdoors … those are successes we celebrate.”

You do not know the background information of the hunter, the hunting scenario or the hunting experience.

I have witnessed newbies drop out of deer hunting altogether or never fully embrace it, because they cannot live up to the expectations or standards of what other hunters have expressed to them about what they should shoot. Garbage!

Asking young or new hunters to pass up on smaller, younger bucks or does is a sure way to turn them off to deer hunting. Preventing the harvest of young bucks has a direct link to the declining number of hunters, according to the Western Association of Fish and Wildlife Agencies.

To a good number of deer hunters I know, whether experienced or not, a 3 by 3 or 4 by 4 basket-racked yearling buck walking on a trail under a stand through the woods translates to a nice buck to harvest.

Let me tell you something. I have been with the Nebraska Game and Parks Commission for over 40 years. In that span, I have seen some longtime hunters, who profess only to take big-antlered mature bucks, check in immature bucks for years in prior hunts. Hypocrites!

I really like what Kip Adams of the Quality Deer Management Association has written about deer hunting and harvest. He stated, “Take a moment to remember why we hunt. Your reason may differ from your neighbor’s, so don’t be critical of what he or she shoots legally or chooses to pass, and never apologize for what you shoot.”

When it comes right down to it, a trophy deer is what the hunter wants it to be. It is an animal legally acquired and in compliance with what the landowner preferred or required. Who knows, the harvest may have been a deer that a hunter pursued for a few seasons or that he or she outsmarted in the woods with a call or rattling antlers. Going deeper, for many of us who hunt, it is not what the animal looks like; the memorable experience of a successful deer hunt is the lasting trophy.

By Pat Molini, Wildlife Biologist and Assistant Division Administrator in the Wildlife Division of the Nebraska Game and Parks Commission

I have harvested one adult buck in my entire life of hunting and its antler size would qualify it as a basket rack. You want to know why; it was the first deer to come by my stand that day. I have harvested or attempted to harvest, the first deer I have seen during every hunting trip. It is just the way I hunt. It does not matter what I am using — bow, rifle or muzzleloader, I will always shoot at the first deer I see given it is a safe shot and it is a legal harvest. I am a meat hunter and proud of it.

I will provide no apology to anyone for taking fawns, does, spikes, basket racks or a giant buck. Nor should anyone apologize for pursuing large antlered deer but one should apologize if you judge someone else’s deer to be inferior because it doesn’t fit your definition of a trophy.

I have been teased by others for shooting a doe or shooting a fawn on a muzzleloader deer permit. I can take the ribbing but I really feel bad for beginning hunters or a hunter just out to enjoy nature with family and friends who are subjected to it. If they harvest a deer that just adds to the enjoyment of the experience. I fear we lose some hunters due to the negativity of shooting a young buck or doe and even cause some division among hunters. We cannot afford to lose hunters, there are many other things competing for people’s leisure time. We need all hunters to assist in population control of big game species.

The Game and Parks Commission understands that many hunters want large antlered deer. This is a common desire of big game hunters throughout the nation and there is no problem with that. Nebraska has some very good age structure in our deer herd. Taking spikes, yearlings and basket racks has not greatly affected this much under our current permitting system. In Nebraska, we stress opportunity, which means we want people in the field having a good time, and a trophy deer is whatever one’s definition of that is.

The post A Trophy Deer is Truly in the Eye of the Beholder appeared first on Nebraskaland Magazine. 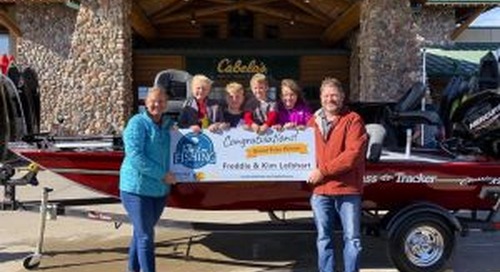 LINCOLN, Neb. – Freddie Leibhart’s mom introduced him to fishing when he was young. Now, the Columbus man i...