A More Primitive Type of Hunt

Nebraska has added more opportunities for deer hunters to vary their hunting styles. This gives hunters the chance to choose different forms of harvest to enhance their seasons or to challenge their skills or even both. I respect and admire the ones who want to take things one step further. Hunting with primitive weapons takes practice, patience and brings you close and personal to your quarry.

Here are a few hunters who did just that:

Garret Tramp has been following his parents in the field since he was just 3 years old. Now at 10 he was ready to go hunting. Shooting a bow would be a challenge at his young age so parents Nick & Lindsay wanted to make sure Garret not only had a great experience  but to be successful and safe. The family determined using a crossbow would be the way to go. After plenty of practice he could shoot accurately at 20 yards and hunted in September from a ground blind in T-shirts and shorts. Garret shot his first doe last year at 12 yards.

I would highly recommend a crossbow for hunters in Nebraska that don’t like to hunt in weather where the air hurts your face!- Nick Tramp

Angie Kokes started hunting as a teenager and is the kind of person that never lets anything stand in her way when it comes to a challenge. Even bowhunting had started to lose its appeal for her. Out of the blue she decided to start spear throwing. She threw for a few years before the thought crept into her head “I think I could hunt with this.” She says, “I am simply a hunter who lives for the challenge of the hunt. I’m not into easy, and the spear has definitely provided me with a challenge. I’m not a hunter filling tags; I am a hunter challenging myself to be better every single hunt!”

and willing to put in the time and effort, just as with any form of hunting. And most importantly,

learn from your mistakes.   –Angie Kokes

Nebraska Traditional Archery member David Manwarren is a true traditionalist. He makes all of his equipment by hand. Recurves, long-bows, arrows, fletching, broadheads and strings without using any commercially made products.

David has also crafted several Atlatls and his own custom darts. The atlatl, or spear/dart-thrower, is an ancient hunting weapon that pre-dates the bow and arrow. His buck was taken at 8 yards from a Treestand. He is one of very few people in Nebraska to have taken a deer with an atlatl .

The post A More Primitive Type of Hunt appeared first on NEBRASKALand Magazine. 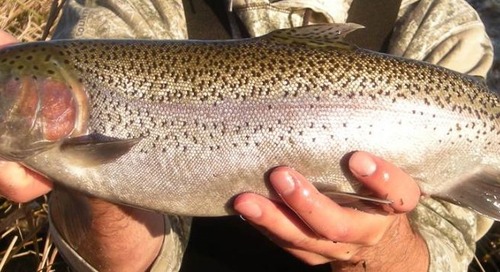 Want to get one more blog post up before I walk out the door for “grandma’s house”.  We will spend lots of ...