There is no other piece of equipment needed to perform as many tasks, in as many ways, under as many conditions, as the knife, especially in hunting.

It can do everything from field dress and skin an animal in the field to cut cord and help spark a fire in a survival situation.

A good knife is a quintessential tool for any outdoor enthusiast, but particularly for the hunter.

For those of us who hunt, that knife is an icon, a symbol of its bearer. Ask any hunter and he or she will tell you about their favorite knife which may even be a keepsake being passed along from one generation to another.

No hunter should be without a good knife!

But, what exactly constitutes a good, all-round knife for hunting? Truthfully, there is no right or wrong answer. It really depends on the individual hunter and his or her needs.

A quality knife for hunting must be adaptable enough to do everything you require. When you’re choosing a knife, it’s important to consider what game you will be hunting, how often you hunt and how you will be using the knife after the harvest.

The choices on the market for hunting knives, however, are another story. Constantly in flux with technological advances, the possibilities for purchasing a hunting knife are many and varied. And, trying to pick one, the right one can be a mind boggling experience.

So, how do you go about selecting a good hunting knife?

Here are some basic considerations to keep in mind from two prominent knife makers in Nebraska.

If you think bigger is always better when it comes to hunting knives, you would be incorrect! An oversized knife will make basic tasks in hunting harder, not easier, and increase your chances of cutting yourself!

Longtime hunting knife maker, Dick Turpin of Lincoln, NE, says a good rule of thumb (no pun intended) is to grab the handle of a knife and carefully stick your index finger alongside the blade length. If the point of that knife is roughly even with or slightly shorter than your finger, that knife is the proper size.

Another veteran artisan of creating fine knives agrees. Knife maker, John Mulcair of Weston, NE, says you don’t need to go “Rambo” style on the size of a knife for hunting purposes. His guideline on a good hunting knife is one that has a blade about 4 inches in length or less, unless, he adds,  you’re hunting elephants or the like.

Depending on what kind of hunting you do, and the game you plan to harvest for the dinner table, you may decide that you need more than one knife. Did you know there was no single Bowie knife; Frontiersman Jim Bowie actually owned and used a series of knives until he modified one that met his needs.

If you’re a dedicated hunter, a solid fixed blade knife is the way to go, according to both Dick Turpin and John Mulcair. They say fixed-blade knives offer the best in ruggedness and reliability and are the simplest to clean and maintain. They’re the top choice for heavy-duty work, though they’re not for everybody. Fixed-blades are bulkier and less safe in transport than folding knives, but have no moving parts that can break.

For general-purpose hunting and even for use around the house, a folding hunting knife is most likely plenty strong enough as well as quicker to deploy, plus easier and safer to carry in the field. The folding knife blade is held in place by a locking mechanism, which prevents it from folding up and cutting the user.

The handle is a key component of any knife. Wood, leather, antler and bone handles tend to be warmer to the touch than metal, and are neat looking. But, these handles sometimes come with metal trim that can certainly feel cold on a winter day. Brilliantly engineered synthetic (carbon fiber, phelonic) hunting knife handles are on the market today as well. Dick Turpin says an effective hunting knife handle must provide good grip, warmth and durability. Whatever you choose, Turpin recommends staying away from thin-handles that do not allow a hunter to get the proper angle with the knife in skinning. That’s why he likes the rounded ones.

Above all, the handle of the knife must comfortably fit your hand!

Interestingly, for the blades of his custom knives John Mulcair acquires 100 year-old butter knives that contain a mix of nickel and silver, and hold a great sharp, edge.

Stainless steel blades on knives are still the most popular choice among hunters, even if they’re a little bit harder to sharpen and they don’t keep an edge as well as a carbon steel does, but they are generally adequate enough to get the job done.

A few features of hunting knife blades you may want to consider are the gut hook, serrated edge or saw.

Probably more of a convenience than a necessity, the gut hook has a sharpened notch or “hook” cut into the topside of the blade that makes it more convenient to open an animal or bird’s abdominal cavity when you need to remove the vital organs. With the gut hook, the hunter makes an incision with a standard blade, then uses the gut hook to extend the incision without puncturing any of the game animal’s entrails. This can be a useful tool when field-dressing big game such as deer.

Also, a partially serrated blade edge can work well, primarily when cutting through cartilage, tendons and bone. A knife with a saw blade, like some folding knives have, can be a handy tool, too, most notably for sawing through bone, cutting kindling around camp or trimming branches from around your tree stand.

The Blade Styles and Variations

Today there are dozens of styles and variations of knife blade shapes. Clip point, drop point, tanto point, spey, pen,  sheepsfoot, dagger point, trailing point and spear point are among more the numerous blade shapes available. However, for the hunter, there are three main styles or variations to be considered.

Clip Point: A clip point blade has a thinner tip than a drop point and can be used to make initial cuts easier because of the pointier tip. As a downside, it can also break more easily.

Trailing Point: A trailing point blade falls between the clip point and drop point designs. It is stronger than clip point and has a back edge that trails upward, allowing for a larger curve to the cutting edge for more slicing surface. This is a great blade shape for cutting meat.

Often ignored is a good sheath for your quality hunting knife. A decent sheath should be lightweight and made from durable leather, stitched well, and precisely fit the knife, according to John Mulcair who prides himself on making top-notch knife sheaths. Mulcair points out that the design of the sheath should not allow the point and edge of the blade to come in contact with the stitching. If the knife blade can be felt through the sheath, it is inadequate, he stresses.

Just remember that any knife sheath needs to be comfortable, stand up to abuse and, most importantly, securely hold the knife while in motion. Additionally, any knife sheath should have some sort of positive retention system (snap-strap) for safety and give proper protection from the elements of nature.

These are the essentials in choosing the best knife for hunting. The remainder is up to you, it all rests with your personal preference. Just don’t forget, as with buying any piece of gear for outdoor activities, you will “get what you pay for.”

Keep your knife sharp and your eyes peeled! 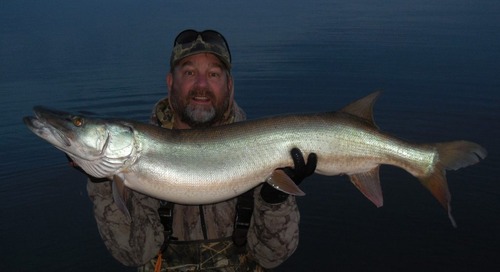 What is a Fish Worth?

I am going to plagiarize myself in this blog post and repeat something I wrote a few years back, back befor...

LINCOLN — The Nebraska Game and Parks Commission is seeking information about two cases involving the unlaw...