A Crane Book For All Ages

An Interview with Jeff Kurrus, author of Can You Dance Like John? What was the inspiration behind the “crane books?” How did these stories develop?

The first time I saw the sandhill cranes, there were a couple of things that stuck out. One was that there are 500,000 to 1 million of them on the Platte River each spring. Two, they all look alike. After doing a bit of research and finding out that they mate for life – if possible – it became a natural fit for the first book Have You Seen Mary? to see what happens when two become separated. Then during a book signing at Rowe Sanctuary for Mary, I started sketching notes about what happens when one of these cranes permanently becomes separated, and then it became a story about love and trying to cope with loss.

Have you always been interested in writing children’s books?

I became interested in children’s books when my daughter, Madeline, was a baby. As a parent, you read a bunch of books to your kid. The more I read, the more I thought that there just weren’t many fiction books about nature. And there weren’t many fiction books that used photography at all. But when I would read nature magazines with Maddie, and then look at these same publications with my younger son, Eli, they were immediately drawn to pictures. I just thought young readers could find a nature story interesting and the photos that accompany the story beautiful. How does the experience of reading a book through photographs differ from drawings? Why have you chosen to forego traditional illustrations for your books?

I wanted to show how pretty and beautiful these birds are, and there was no better way to do that than working with world-class photographer and Lincoln native Michael Forsberg. Nebraska is still, to many people, a flyover state. There are no beaches and no mountains, and if you want to see what most people think as gorgeous Nebraska, you get off of Interstate 80. But if you want to see one of the most beautiful, magical spectacles in the world, you stay right on Interstate 80. The state has such a nice mix. I really thought by working with Mike we could show how beautiful the birds are and hopefully get people to care about the species. There are little messages throughout both books as well: how hard migration is for these birds throughout the middle of the continent – the Central Flyway, and with that, being able to weave a story with some natural history of these birds as well. After reading these books, kids who have never seen a sandhill crane should be able to pass a basic test about them. Where are they roosting? What do they eat? Are they a communal bird or are they isolated?

Did you do the kid-review process this time like you did with your other two books?

Yes, I asked a bunch of questions to teachers and students in the Conestoga, Papillion and Gretna public school districts. Then I worked with my own kids as well. The kid process is huge because they are so honest with their opinions. What was the most difficult part of writing and how long did it take you to write “John”? I started writing the book in March of 2012 while visiting Rowe Sanctuary. Then, over the next few years, I continued to work on it to make sure that every scene – because you don’t have a lot of them – was important and concise, which is always the most difficult part for me. ■ The post A Crane Book For All Ages appeared first on NEBRASKALand Magazine. 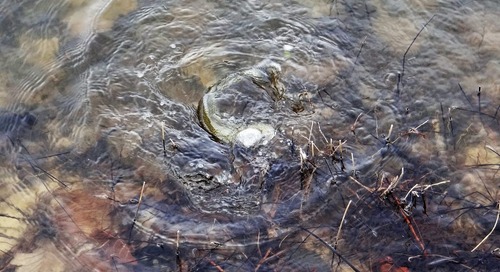 Good For You: Stocked Trout

They strike often, fight strongly, are easy to clean and cook, and taste great! Nevertheless, a significant...