It was a calm March morning when Dan Leuenberger first heard it: the echoing calls of greater prairie-chickens.

Climbing a hill on his Johnson County farm, he spotted a flock of about 20 birds gathered for mating season. Each spring, males congregate on leks, or display grounds, to perform mating rituals that have made the species an icon of the prairie. They stomp, leap, spin in circles, inflate orange air sacs on their neck and raise feathers on their head, all in hopes of attracting females.

Seeing the birds was an exciting moment for Leuenberger. The previous year, he had set out to do something conservation professionals say is rare: creating a successful prairie-chicken lek on private property from scratch.

A Vision for Bird Habitat

Leuenberger’s interest in creating game bird habitat goes back to his childhood, when he started hunting. Leuenberger is now 77 years old.

“Hunting has always been very, very important to me, whether it’s birds, deer, whatever,” he said. “I like to hunt. And I think hunting has made my awareness of nature much stronger.”

When you first start hunting, your goal is to harvest something, Leuenberger said. “As you get older, you still have that objective, but you start thinking about, ‘How did these birds get here? What do they need in order to have more of them?’,” he said.

Leuenberger had the chance to explore that interest when he inherited 91 acres of the family farm, located in southeastern Nebraska. He decided to put all of his land into the Conservation Reserve Program, which provides landowners with rental payments for taking land out of agricultural production and instead restoring grassland habitat.

Leuenberger enrolled some of his cropland in the State Acres for Wildlife Enhancement practice, an option under continuous CRP, to create greater prairie-chicken habitat. As part of his enrollment, he met with Anna Ferguson, a resource conservationist for the USDA’s Natural Resources Conservation Service, to plan how to establish, manage and maintain the project.

Together they sparked the idea to create a prairie-chicken lek on Leuenberger’s property, in addition to the program’s usual habitat requirements. Leuenberger already had many conversations with his bird hunting partner, Jim Neville, about getting prairie grouse to use his property for a lek, and he had a promising site. They knew greater prairie-chickens were already in the area because Leuenberger spotted them occasionally.

But would those birds actually use a man-made lek? It’s rare for that to happen, experts say.

A Journey Toward a Lek

Ferguson enlisted the help of Bruce Sprague, a Pheasants Forever Farm Bill biologist, and the two began drawing up plans, setting aside four acres on a hilltop for the lek.

“When you’re developing a lek, you want it to be one of the highest points on the property, with a good view so the prairie-chickens can see for a long distance and don’t feel surrounded,” Ferguson said.

Sprague selected a seeding mix of shorter-growing alfalfa, blue grama and several types of clover for the lek, and situated other required habitat components — brood rearing cover, nesting cover and winter cover — with the lek in mind.

They also asked Leuenberger to mow the lek to keep the vegetation short and inviting for the chickens. Ferguson suggested he remove a nearby grove of cottonwoods, which could attract predators.

Leuenberger completed preparations for the lek in 2017, and the following spring, Ferguson received an exciting email from him: news that the birds had come, along with pictures of them on the lek.

“I was shocked to get the email,” Ferguson said. “I guess I was surprised that the birds came so quickly.”

Since then, Leuenberger sees about 20 greater prairie-chickens at the lek each spring. “It just makes a person feel good that you contributed to this project — that maybe you’re doing something good for them,” he said.

The Influence of Habitat

Prairie-chickens rely on native grasslands, which in Nebraska are mostly “working lands” used for cattle production. “Grazing creates variable habitat structure, from short to tall, which is important to prairie-chickens throughout the year,” said Laux.

Good habitat is also treeless and free of other obstructions, he explained. That makes invasive trees, such as eastern red cedar, Siberian elm and Osage orange, a particular threat.

In Nebraska, greater prairie-chickens are considered an at-risk species, and they are losing their native grassland habitat to agricultural expansion and other development, tree encroachment and invasive plants, such as smooth brome. Populations have declined throughout much of their range, but the birds continue to thrive in portions of Nebraska.

“Nebraska is still very much a stronghold within their range, and that’s primarily due to the expansive Sandhills region, which is still a very intact grassland ecosystem,” said Laux.

Small remnant populations of prairie-chickens occur in a number of counties in southeastern Nebraska, where Leuenberger lives. Grassland habitat is much more limited there compared to the Sandhills, but well-managed CRP fields like Leuenberger’s provide the species with important habitat.

Leuenberger’s lek project might not be a realistic venture for all landowners, Laux said. Having the proper surrounding landscape — large blocks of native grasslands — is crucial. Even then, success would likely be rare.

“If landowners want more prairie grouse on their property, they should first focus on providing other necessary habitat elements, including suitable grassland cover for nesting and brood-rearing,” Laux said. He called Leuenberger’s project “a great example of how conservation programs like CRP can benefit wildlife and be tailored to fit a landowner’s interests.”

Leuenberger has established two viewing blinds on his property so he can share the excitement of seeing the birds with friends and family. The coronavirus pandemic halted some of the first viewings, but he’s hopeful others can join him in the blinds this year.
For her part, Ferguson said working on this project was a highlight of her career. “It’s unique to anything that I’ve been involved with, and I’m so happy for Dan,” she said. “There isn’t a nicer guy that deserves to enjoy what he’s wanted to create and worked so hard for.”   ■

More Than Just a Lek

Leuenberger’s CRP project went beyond just establishing a lek. He also planted a mid-height mix of grasses and wildflowers, including little bluestem and aromatic aster, as brood-rearing habitat for game birds. And he planted a tallgrass mix with species such as big bluestem, Indian grass and butterfly milkweed as nesting cover for game birds and other grassland birds. The wildflowers in these mixes will also provide great pollinator habitat and a riot of color from spring through fall.

A dedicated conservationist, Leuenberger has other conservation projects in the works. In recent years, he established several food plots on his land, planting wheat, milo, sunflowers and other crops as food sources for songbirds, deer, doves, quail and other game birds.

In one area, he also replaced a stand of invasive eastern red cedar trees with a planting of 25 bur oak seedlings. Bur oaks offer habitat and food for a variety of species, including squirrels, turkeys, deer, mushrooms and hundreds of species of insects. 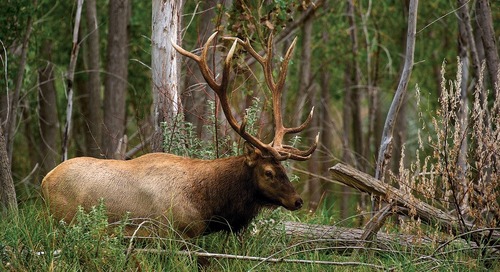 Antler Basics Horns and antlers, decorative headgear sported by some of Nebraska’s best-known species, are ... 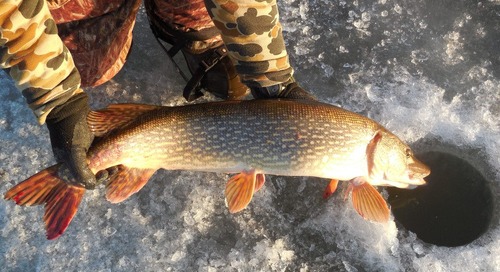 I got to looking through some old blog posts and discovered something interesting.  Seems as though in past...