Home » NEBRASKAland Magazine » A Break, and Some Thoughts
× Share this Article

A Break, and Some Thoughts

Other than my wife and daughter, I have had little interaction with any other humans for the past several days.  Anytime I touch a surface, or come within 10 yards of another person, off I go to wash my hands.

At least to this point, our governor has not ordered us to lock down for a couple of weeks.  So, yes, I would still tell you that you can sneak away for a little fishing and practice social distancing.

I did that for an afternoon last week.  Know what?  It was great!

Between sitting in an office by myself, and sitting at home with family, it seems like we are just waiting around for the disease to knock on our doors.  At least for a little while on the water, I was reminded that life goes on. . . . No news media, no social media, just migrating waterfowl, a longer day, greening grass, and water.  Yes, the weather was cloudy and gloomy, again, but spring is coming.

And, the fish are biting!

I tossed a jig with a plastic paddle tail, fished slow, barely swimming along the bottom.  Found three bass that were willing to bite and then just before dark a nice black crappie and this fish: OK, now all of you glanced at that photo and know what I caught. . . . I have often said that identification of hybrid fish can be tricky.  They usually have a combination of characteristics of the two parent species.  The picture where I am holding that fish is a classic; that fish exhibits characteristics of both walleye and sauger.  One other thing, you cannot tell from the photo, but the cheeks were scaled.

Let me ramble about saugeye for a bit.

I have worked as a fisheries biologist for the Nebraska Game & Parks Commission long enough that I have seen several wheels come full circle.  Years ago we stocked saugeye in a number of Nebraska waters.  At the time, it was believed that saugeye might do better in less than ideal walleye habitats–waters that were too small and perhaps a little turbid.  Actually, the best walleye habitats have some turbidity, are not crystal-clear, but I digress.

Anyway, we came to the conclusion that saugeye really did not perform any better than walleyes in the less-than-ideal habitats where they were stocked.  Since it takes the collection and coordination of spawning activities of two different species in order to produce a hybrid like a saugeye, unless it offers real advantages, it is easier to produce walleyes to stock.  We phased out saugeye stocking years ago because we have always produced plenty of walleyes to stock.

Now there has been a resurgence in saugeye popularity and we are stocking them again.  However, many of the saugeye being stocked now are advanced fingerlings, fish of 8 inches or so before they are stocked.  We are also doing more stocking of advanced fingerling walleyes now.  Once again I doubt that the saugeye are really any better than the walleyes.  But, when one catches one on an early spring afternoon, who really cares?

Once again, all the fish I caught were released.  You’re welcome. The post A Break, and Some Thoughts appeared first on Nebraskaland Magazine.

LINCOLN, Neb. – In a proactive effort to prevent the potential for spread of the coronavirus disease (COVID... 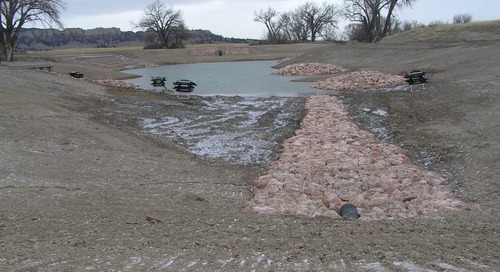 One of the biggest Aquatic Habitat rehabilitation projects we are working on right now is out at Ft. Robins...