8 Reasons to Tackle Bluegill this Summer

Maybe it’s the kid in me, I don’t know. But, at 54 years of age (approaching 55), I still enjoy catching bluegill from the bank in summer, how about you?

I know, I know, the lowly bluegill, a sunfish family member with more nicknames than a popular sports figure, is a prey species that doesn’t get very big. Why would I waste my time along the shoreline or on a pier catching and releasing THIS FISH?

Let me tell you why. In my view, bluegill fishing is as American as apple pie and baseball. In fact, doing battle with an 8 to 10-inch bluegill on light monofilament line with an ultralight rod and reel combo using a nightcrawler (earthworm) ranks equally to landing a 21-inch largemouth bass on an expensive medium-action spinning rig with a flashy spinnerbait!

Think about it. For a lot of us, bluegill fishing defined our first fishing experiences on the water. Evidence of that can be seen repetitively at our summer family fishing night events.

My own kids grew up first catching bluegill in Nebraska waters.

Now, my nephews get a charge out of catching bluegills.

So, I have taken the time to compile the top eight reasons why I think you and your family should tackle bluegill for your summer fishing in Nebraska waters (right now, the walleye and largemouth bass fishing snobs are turning their noses up at this blog post.) Here are the reasons.

1. Available Everywhere! Just about. The bluegill, Lepomis macrochirus, is native to Nebraska and inhabits nearly all ponds, reservoirs, lakes, old river oxbows and meandering creeks. If there’s a decent-sized pool of water available, chances are, there’s probably bluegill in it!

2. Easy to Find. Pick a spot along a bank and cast out into the water, almost. The bluegill is a fish of the shallows and exists near the shoreline around vegetation, structure, timber and even sometimes where there isn’t any aquatic habitat. Look for bluegill around or near their plate-shaped spawning bed depressions. Bigger bluegill tend to still hang out in the deeper, darker water just beyond those depressions as well as along the deeper edges of weed, moss and algae lines in summer.

3. Simple Equipment and Cheap Bait. Basic fishing gear will suffice for catching bluegill. Really, it’s whatever you may have on hand at home. I like to use an ultralight rod and reel with light line, small hooks, weights and bobbers. Regarding bait, the bluegill is certainly not picky. Anything from nightcrawlers (earthworms) dug in the vegetable garden to canned sweet corn kernels bought at the supermarket to grasshoppers caught in the weeds will work just fine.

4. Lots of Them, Good Action, Bold Fish, Strong Fighters, Made for Kids to Catch. Bluegill are prolific in nature and a numerous prey species. They are a schooling fish, and quick, competitive, aggressive feeders. One of the more interesting traits of the bluegill is how bold they can be. Many bluegills have no fear of the angler trying to catch them, even in clear water! They also have a reputation for being one of the strongest fighters in the fish kingdom (per square inch or ounce, that is) typically swimming at hard right angles with their round, flat bodies after being hooked. Hence, bluegill are ideal for kids to catch!

5. Hot Action in the Heat. Some of the best bluegill fishing actually occurs when the intense summer heat and humidity have descended on us. From now through Labor Day, bluegill save the day for many families vacationing near water in our state park lands and wanting to catch fish. After all, bluegill are cold-blooded creatures. That means their body temperature varies with their surroundings and they get more active and hungry when the water is warmer.

6. Flies for Bluegill. Even though you might think fly fishing is reserved for trout, it is also one of the most effective, exciting ways to catch bluegill, especially in the summertime. Small insects are a major portion of the bluegill’s diet, and an artificial fly resembling one of these insects is usually irresistible to it! According to the Cornhusker Fly Fishers, a premier fly fishing organization, the Zug Bug, an impressionistic pattern that can appear to mimic all types of aquatic insect larvae, is an excellent summer fly to cast for panfish like bluegill. Really, you can easily catch bluegill on just about any fly imitator you have in your box if you present it to them properly. Bluegill particularly offer superb training for beginning fly anglers!

7. Fun of Paddlecraft Fishing. Anglers with kayaks, paddleboards, canoes, etc. have a blast for fishing for bluegill! Many of these anglers do what is called “softbaiting” for ‘gills. This involves using smaller weighted jigheads and rubber or plastic lures that resemble baitfish, earthworms or aquatic organisms. Softbaiting reduces the need to take messy live baits on board and allows for quick, repeated casts, catches and releases. These stealthy anglers are able reach difficult places with their versatile paddlecraft and find much excitement fighting a game fish like a larger, scrappy bluegill as it tries to pull the lighter vessel through the water.

8. Excellent Table Fare. Bluegill fillets are absolutely delicious rolled in some flour and seasonings, then given a swim in hot cooking oil. Bluegill are also are a healthy food selection to eat. That’s because they’re lower in the food chain and tend to be smaller so they’re less likely to be the subject of consumption advisories than bigger predator fish.

Bluegill fishing may be among the purest forms of angling, no question. Little bluegill can be the easiest fish to catch while hooking bigger ones can present some challenges. To get information on where to catch bigger bluegill, click here.

For many of us who like to cast lines, the mighty bluegill gave us our initial, exciting glimpse of what would bite a hook under the surface of the water. Next time you are going fishing, don’t forget about the bluegill. It may be a smaller fish, but it’s qualities make it a trophy in every sense.

The post 8 Reasons to Tackle Bluegill this Summer appeared first on NEBRASKALand Magazine. 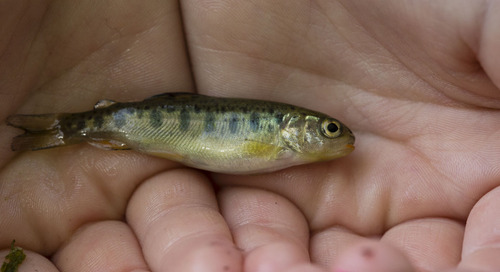 Game and Parks accepting Trout in the Classroom applications

LINCOLN, Neb. – Applications are being accepted until July 31 for the Nebraska Game and Parks Commission’s ...