6 reasons to hunt turkeys in Nebraska

Anyone who has hunted turkeys in Nebraska knows that it’s one of the best turkey hunting states around. Why? There are plenty of reasons. Following are just six.

1 Turkeys are everywhere.
Literally, you can find turkeys in every county in the state! Some counties in Nebraska even rank within the top 10 counties in the nation for turkey abundance. 2 There are plenty of places to go.
Turkey hunting opportunities on public lands are exceptional in Nebraska. Hunters can find wild turkey on public land throughout the state, but the northern panhandle and Loess Canyons in the southwest parts of the state, as well as the Missouri and Platte River valleys, offer especially good hunting opportunity. View the Public Access Atlas to view detailed maps of public land throughout the state. 3 It’s a great way to burn off the winter fat!!
Usually this time of year, our new year’s resolutions have long since sailed. I really can’t remember what mine exactly was, but it had something to do with getting fit. What better way to burn calories than by finding a public or private hunting spot and chasing after some gobblers? Not only is this a great way to put some miles on, but it is a great way to dust off the hunting equipment and put it to use. 4 It’s a great way to keep the tradition alive.
Who took you hunting for the first time? Chances are you know exactly who. Hunting is a tradition embedded in the cultural fabric of our great state, and without recruitment our tradition is in danger. A turkey permit for a kid 15 years old or younger is $5. No habitat stamp or small game permit to add on to that price — only 5 bucks. In this modern day and age, it is easy for the younger generation to brush off hunting in favor of other activities because they have never had the true experience of the hunt. Work at it. Do more than your mentor did for you. Teach them that the true experience isn’t pulling the trigger. 5 Permits are affordable and easy to come by.
Permits are plentiful and may be bought at Game and Parks permitting offices, online and by mail. In the spring, hunters may buy up to three permits good for one bird each; fall hunters may buy two permits good for two birds. In 2015, Nebraska also began offering mobile turkey permits, making it even easier to get a permit, no matter where you are. 6 Nebraska hunters are happy hunters.
Maybe it’s because of the plentiful birds, the plentiful permits, the great access to land with lots of turkeys, the old-fashioned Midwestern hospitality that hunters encounter, or some combination of all of those things, but hunters who come to Nebraska to hunt turkeys tend to leave happy. In fact a recent survey showed 90 percent of Nebraska turkey hunters were satisfied with their hunt. The post 6 reasons to hunt turkeys in Nebraska appeared first on NEBRASKALand Magazine.

Southeast District Birding Day Set for May 11 at Burchard WMA

LINCOLN – Bird watchers of all ages are invited to join the Nebraska Game and Parks Commission for Southeas... 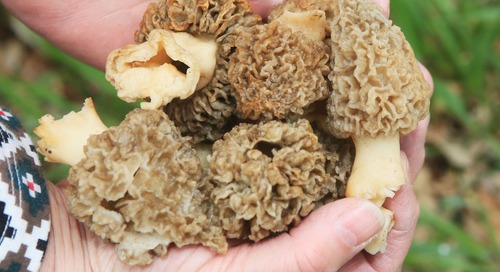 Searching for the Mighty Morel

It’s official, Lincoln County is in the books for morel mushrooms this year. This week co-workers of mine f...