Need to get a report up here today on the 2016 High School Bass Championship this past Saturday.  Here’s the bare bones:

This sixth annual state tournament, which included 32 teams, was hosted by the Nebraska Game and Parks Commission and The Bass Federation-Student Angler Federation. Each team could weigh in a maximum of five bass, with a minimum length limit of 15 inches.

The top three teams are eligible to represent Nebraska at the Southern Conference Regional tournament on Oct. 15 at Cypress Lake Bayou near Shreveport, La.

Now let me show some pictures, fill in some blanks. . . .

There were a few flashes of lightning at the 5:30 a.m. check-in, we worried about having to delay, but as it got lighter the thunderclouds dissipated and we launched on schedule. The parking lot and ramp was crowded, but everyone knew what they were doing and launching went like clock work.  I am going to use a blurry picture to give you the idea: Thirty teams fished the tournament this year, the most ever!  That means that the top three teams this year get to advance to regionals!

Here is a picture of the leader board that I snapped quick before the weigh-in got hectic.  There were 32 teams registered, 30 fished. You can see we had good representation from all over the state, with a lot of teams from the Omaha area, Kearney and North Platte.

Elwood Reservoir looked wonderful, I always smart off by saying “Fish need water” and it was really good to see ole Elwood near full again!  Water levels there have been good the past couple of years and the Bass populations have benefited.  There was a lot of shallow water cover to flip, pitch and throw to. I did not have time to get a lot of details from the anglers at the weigh-in.  We had some good cloud cover and wind early, and most mentioned the bite was best then.  Later it cleared and it was miserably hot, again, by the 1:15 p.m. weigh-in.  I am sure the bite lagged during the mid-morning, but I heard a couple of teams mention that they were able to scratch their last fish from mid-morning on to the finish time.  It sounded like main lake points and secondary points held the most fish, and I am betting some wind blowing into those points made them better.  The 5 mph, no-wake speed limit on all of Elwood meant there was no racing for the best spots.  Fortunately, there are lots of points on Elwood.

After the launch we have some time to catch our breaths, but then we have to get stuff ready for the weigh-in. I love seeing the game faces on the kids before they fish, everyone is “holding their cards close to their vests”.  There are some game faces on when they come to weigh-in too, but then you can see the excitement in their eyes and soon they cannot contain it anymore.  We start weighing fish, everyone starts gathering ’round and then everyone is talking, sharing how they did.  Some of the kids play it pretty cool while weighing-in, some of them are beaming with excitement.  They do not even have to say anything, I can feel it, gets me fired up too!

Wier and Stevens from McCook weighed first.  They had their five fish and weighed early.  Both of them were very excited, as they should have been.  I told them it would take a limit to win and they had one!

Soon after another team came in early with a 5-fish limit.  Wouldn’t you know, they quickly bumped the McCook boys.

This would be Pinhero and Jansen from Omaha Westside.

Big Bass for the tournament was just a couple of hundredths less than 4 pounds.  That fish was the big one being held by Pinhero and Jansen.  We did not see any bass bigger than that, but we saw a real consistent average of 2 1/2 to 3 1/2 pounds, and the fish were all in good condition.

Elwood is the one waterbody in Nebraska where a person has a chance to catch a Spotted Bass.  I believe the Spotted Bass population there is “up and down” depending on water levels and has suffered recently with extended periods of low water.  I was hoping there were be some Spots caught and I talked to several of the high school anglers who said they had caught some Spots, but none big enough to be legal.  But, we had one Spot brought to the scales!  This would be Liebhart and Zimbelman from North Platte with their good-looking Spotted Bass.

As you saw in the news release our winning team this year, Pavelka and Rowland were defending champions from last year (2015 High School Bass Fishing Championship).  They had a limit of fish, but did not weigh early like the other two teams with limits.  We were in the middle of the weigh-in when they came striding to the staging tank with their black weigh sack full of fish.  Most weigh sacks are transparent so everyone has an idea of what is going to be weighed, but with their black sack, Pavelka and Rowland again created a lot of suspense when they walked up.

You might notice Tyler Rowland only holding one bass and some extra “gear” on his arms.  Let me tell you the rest of the story. . . .

Tyler was involved in a very serious accident on Father’s Day.  He was almost home after fishing a tournament on Merritt when he collided with a semi-truck just north of North Platte.  Tyler is probably fortunate to be alive, the accident was very bad.  One arm was bleeding so badly that a tourniquet was applied and Tyler has not had all of his feeling return to that arm yet; that is why he needed the extra gear to attach a rod to his arm and allow him to reel.  Tyler’s Dad told me he stayed in a wheel chair after the accident for only a short time and could not stand that any longer.  He is walking now, but still waiting on strength to return to his legs too.  His doctors believe that with time he will make a full recovery.  I have no doubt that he will!

He was not going to miss this tournament.

I was sure to be on the dock when Tyler got there and was making his way onto the boat; wanted to help him if he needed it.  He did not.  As Tyler and Grant pulled away from the dock I told them to bring me some fish.  Grant promised me they would.

Confidence can go a long ways to help you consistently catch fish.  These guys have it, and they can catch fish.

Pavelka and Rowland had a plan, they did last year too, and they fished it.  Grant threw crankbaits while Tyler threw a Senko.  They both caught fish, most of them first thing in the morning, but finishing out their bag later.

At the weigh-in, Grant carried their black weigh-in bag to the staging tank while Tyler found a lawn-chair.  As I got their bag of fish ready to weigh, Grant reminded me that they had promised to bring me fish!

Sorry I cannot tell stories for all of the kids that fished.  I am sure that if you know them, you have heard some.  You can see more photos of the anglers and their fish on our Family Fishing Nebraska FaceBook page.

A big “Thank You” again to the boat drivers/captains who donated their time, equipment and expertise.  We drafted some folks to help us with the weigh-in and logistics, and a big “Thanks” to them.  And, “Thank You” to all the teams that showed up to fish this year!  We are thrilled to have had 30 teams fish!

We had three teams weigh tournament limits and all three of those qualified to go on to regionals in Louisiana this October.  I know they will do us proud! 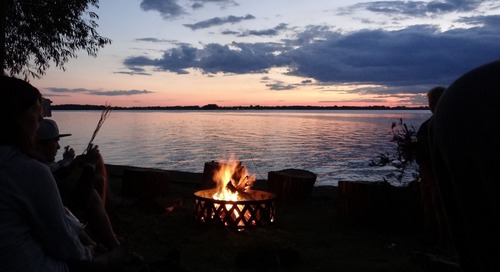 Safety First with Campfires, and then Marshmallows, Hot Dogs

A camping trip is not complete without spending some time around a campfire in the evening. Swapping storie...

LINCOLN – A women’s clinic teaching the safe use and ownership of guns is scheduled for Sept. 10 at the Neb...