I have a very informative video to share on this blog post.  Now, do NOT ignore it just because you see that it is filmed on ice.  Yes, I am proud to be an ice angler and we may be crazy, but that does not mean that we may not know a thing or two.  The subject of this video is fish parasites, it just happens that it was filmed on ice, watch it, learn from it.

There are a variety of parasites that infest our freshwater fish; some can be seen externally, others are found only internally.  As that video said, most of those parasites have a complex life cycle and infest a series of different hosts in the different stages of their life cycle.  Parasites are present in our waters all the time and there is not a thing that can be done about them.  In most cases the parasites are NOT prevalent and are not observed.  However, at other times parasitic infestation rates will increase and they can become very evident.  Those parasites can become more prevalent at almost any time of year, even during the winter and early spring.  In most cases some kind of stress on a population of fish will make them more likely to suffer from a greater infestation of parasites.  For example, when we have low water levels, fish can become crowded and stressed and much more likely to have noticeable infestations of parasites.  Even then, the health of the fish may be affected by parasites, but fish seldom perish from parasite infestations.

Also as the video said, there are no parasites in our Nebraska fish that are a danger to humans especially if the fish are thoroughly cooked.  I would NOT make a habit of making sushi out of any wild-caught fish unless you are certain there are no parasites present.  Also, I would not bet my fishing buddy that I could swallow a live minnow!

If you are interested, here is a chapter from our Pond Management Guide Series with some more information on fish diseases and parasites, Fish Parasites and Diseases.

I know it is not a pleasant thought to think about little “creepy crawlies” out there infesting our fish.  As I said, most of the time, even though they are always present, you will never know about them.  It is just one of those usually unseen, unpleasant things that happens in “the wild” all the time.  “Mother Nature” is not kind. 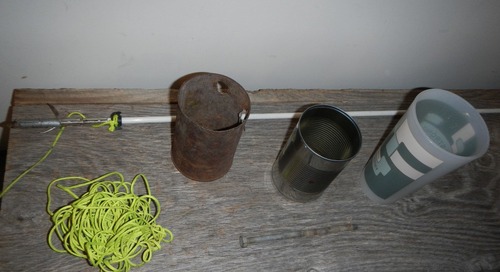 How to make a home made bowfishing kit: Step 1: Find an old bow you wouldn’t mind using as your ‘fishing bo...