What’s all the buzzzzz about? Nebraska’s state insect Did you know that the state of Nebraska appointed the honeybee (Apis mellifica) to be the official state insect in 1975? Though not native, these little guys do a lot for us Nebraskans. Honeybees produce beeswax, propolis (aka bee glue), bee pollen, royal jelly, and one of my absolute favorite commodities, HONEY!

Honey, or liquid gold, as I like to call it, has endless uses. Spread it on your peanut butter toast, drink it with hot tea to soothe your achy throat, and put it in your hair for some extra shine! Choosing to eat local made honey even helps with those annoying allergy symptoms. Backyard bee keeping is all the rave right now. If you think about it, being able to go collect honey from your own personal hive is a form of being self-sufficient, it’s an entertaining way to spend time outdoors, and you are helping Nebraska’s flora, so what’s not to admire? Another crucial responsibility of these buzz machines is to pollinate! That means that all those flowy fields of Alfalfa we feed our livestock and all the pretty flowers we plant in our front yard would not be possible without the help of these little flying wonders. It is believed that bees assist with the growing success of up to 80% of all green growing things. Wow!

You see, the honeybees need the nectar and protein rich pollen from flowering plants to help feed their bee friends and bee babies back at their hives. The nectar is consumed by the collecting honeybee and mixed inside their bodies with a special enzyme. This blend is later transferred into a beeswax honeycomb pocket back at the hive. After being sealed up with more beeswax, it dehydrates and becomes the honey we know and love. In the process of collecting the nectar and pollen, bees are flying around from flower to flower. As you can imagine, some of the pollen falls off or is rubbed off of the bees’ bodies, which BINGO pollinates another plant!

So after reading this, you’re probably thinking to yourself, “Boy, I could really go for some honey right now. Where can I get some”? Because we have so many great Nebraskan beekeepers who think ahead, you are in luck! Many of our grocery stores carry local honey companies’ products year around. The season of outdoor farmers’ markets (Late April-Late October) is just around the corner which is another great place to buy honey and meet the noteworthy people who collected it. You might even consider asking your friends and neighbors. More and more people are getting into Backyard bee hiving and you never know who might have a honey surplus!

So let’s recap, you can now impress your friends at the next outdoor get together with the fun fact that Nebraska’s state insect is indeed the honeybee, honeybees are an important part of Nebraska’s ecosystem because they pollinate like nobody’s BEES-ness, and you can support local Nebraska honey producers by buying their products! How neat is that?!

The post What’s all the buzzzzz about? Nebraska’s state insect appeared first on NEBRASKALand Magazine. 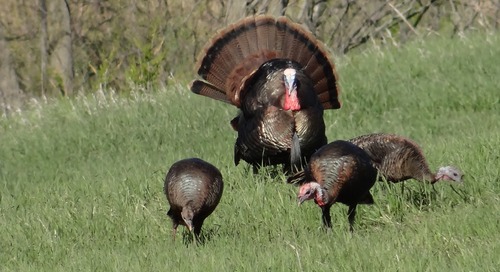 Truth be told, I’m finding it difficult to cope as I wait anxiously for Nebraska’s spring wild turkey hunti...