LINCOLN – The trout lake at Two Rivers State Recreation Area (SRA) will open for fishing on March 12. This year, anglers will be able to fish for larger trout, as well as an additional species of trout.

A total of 7,500 rainbow trout have been stocked in time for opening day, of which 500 fish are 16 inches in length and the remainder are 11½ inches. In addition, 500 12- to 13-inch tiger trout were stocked March 10. Tiger trout are cross between a brown trout and a brook trout.

“The tiger trout will enhance the experience by giving anglers a solid strike and putting a bit more bend in the pole,” said Don Gabelhouse, fisheries administrator for the Nebraska Game and Parks Commission. “These colorful fighters while make for great trophy pictures.”

All trout caught in the lake (No. 5) must be harvested and not released. Anglers must first purchase from the park office a daily trout tag for $6. Each tag is good for a daily bag limit of four trout. A person may have up to three tags per day and 12 trout in possession. An adult angler may have two children under the age of 16 fishing under the authority of his tag, but the group bag limit still is limited to four trout per tag.

The trout lake is open from 7 a.m. to sunset every day. Anglers, except residents younger than age 16, must have a Nebraska fishing license. All vehicles entering the park must have a park entry permit.

Anglers possessing trout on any other lake at Two Rivers SRA must have a trout tag, as well. Anglers are allowed to use one fishing rod and reel each. Each angler must report his or her catch and return tags to the park office when finished.

To avoid potentially long lines in the office, the Commission recommends anglers purchase park permits before arriving at the park. For more information, call Two Rivers SRA at 402-359-5165.

In addition to fishing, Two Rivers is an excellent site to observe a variety of birds during the spring migration.

Two Rivers is located near Venice in western Douglas County. 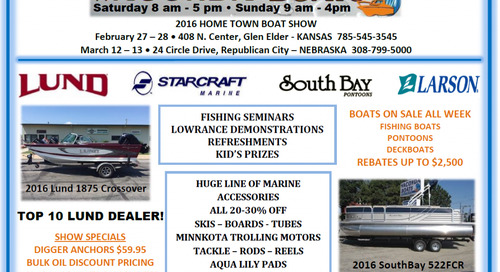 Heading for another boat show this weekend, this time in Republican City: I know, I know, it is just plain ...

LINCOLN – Gwen McGhee of Newcastle won Ponca State Park’s Hiking Marathon. She was one of 16 people from Ne...