There has been some “press” recently about a project to improve stream conditions on one of our trout-supporting, cold-water trout habitats in Nebraska.  The first story I saw on it ran in the Scottsbluff StarHerald, Sowbelly Creek Project will Restore Trout Habitat.  My fellow-blogger here at the Game & Parks Commission, Justin Haag, recently posted about the project, Sowbelly on the Rise (you gotta look at Justin’s blog, he included some great photographs!), and here was the Games & Parks Commission official news release:

The effects of torrential spring flooding has dampened activity at Harrison’s Coffee Park for months, but thanks to a cooperative effort between local, state and federal officials there’s been a lot of movement at the remote attraction in Sioux County in recent days. Before long, trout anglers will be among those bringing the action.

Major clean-up efforts at the park, located along Sowbelly Creek in the heart of the Pine Ridge in Sioux County, began last week when Fuller Construction arrived with heavy equipment. The workers have been using a track-hoe excavator and six-wheeled dump truck, among other equipment, to remove a massive logjam along the creek — one byproduct of a storm that brought 4-6 inches of rain to the already saturated area one night in June. The downpour flooded the narrow canyon and carried logs downstream to the park where a fallen cottonwood tree at a bend in the creek is suspected to have triggered the logjam. The backed-up trees and logs, estimated to total between 2,000 and 4,000 cubic yards of wood, are now being moved into piles to be burned this winter.

The park, situated in a canyon that links the table lands along U.S. Highway 20 to the grasslands north of the Pine Ridge, is owned by the village of Harrison despite being several miles away from town. It has been closed since the flood, with its footbridge washed out and debris scattered throughout its playground, picnic areas and the half-mile of creek.

Matt Steffl, a Nebraska Game and Parks Commission wildlife manager in the northwest district who helped spearhead the clean-up effort, said the creek will become even more accessible to trout fishermen than it was before the flood, with the removal of obstructions along the bank. And, from a fisheries standpoint, Steffl said the flood actually helped the stream’s health, exposing rock by washing silt and soot from its bottom and deepening pools.

“We don’t have a lot of miles of public cold-water trout streams in Nebraska, so we like to do what we can to take care of what we have,” Steffl said. “When the work is done here, we expect it to be even more of an attraction. When that flood went through, it washed out a lot of the ash from the ’06 wildfires and also cut some holes here and there. In most places, it made a lot better cold-water stream than what we had before.”

The park is expected to be open and ready for visitors sometime in the spring.

Hopefully, you will take the time, follow those links, and read.  You will learn a lot more than I will be able to tell you.  In short, there had been a log jam on a section of Sowbelly Creek near Harrison.  That log jam had altered stream flow and threatened to cause even more problems.  A partnership of local, state and federal agencies stepped in this fall to take care of the problem.  That work will alleviate potential problems the log jam could have caused with flooding and stream flows and in the process maintained and improved trout habitat and angler access.

Let me add a little more information here:  Nebraska does not have a lot of cold-water trout fisheries.  We have some, by the way, if you want to know about them, you have to see this, Trout Fishing in Nebraska’s Streams.  Nebraska actually has a lot of river and stream miles within its borders, would you believe over 12,000 miles in 13 different drainage basins?  But, only a small percentage, less than 5%, are capable of supporting trout.  Cold-water streams capable of supporting trout are a limited resource in Nebraska and we need to value, and take care, of every mile of them!

You can look forward to more habitat and access enhancements on Nebraska’s cold-water streams in the future.  I will not give you any details right now, because I do not have them.  I will tell you that we are in the planning stages and you will see more of this kind of work on our cold-water streams in the coming years.  I love exploring all of those streams and catching those beautiful trout from some of the most beautiful places in the state.  I look forward to doing that for years to come and I am thrilled that these important resources should be even better for a lot longer than that. 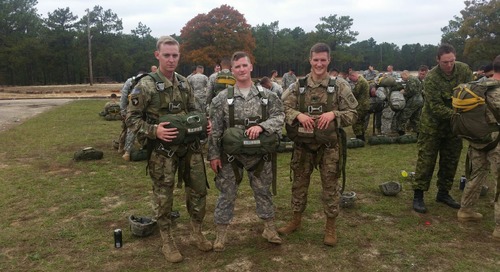 U. S. Armed Forces Veterans are all around us. A huge debt of gratitude is owed to each and every one of th...

Know Your Target and Bag Limit for Firearm Deer Season

LINCOLN – As hunters prepare for the Nov. 14 opening of the firearm deer season, the Nebraska Game and Park...