Alleged sightings of mountain loins tend to cause a hysteria in some parts. . . . In the future, Nebraska anglers will have to keep their eyes open for tigers too.

No, I am not talking about the large, orange and black-striped cats that adorn boxes of breakfast cereal.  I am referring to a fish that is now being stocked in some Nebraska waters.  In fact, some of you may have already heard about tiger trout and in recent blog posts, I have been hinting there is more to that story . Tiger trout have obtained a reputation as a fish that is relatively easy to raise in hatcheries, and then they are claimed to be relatively aggressive predators once they are stocked.  Our Nebraska State Fish Hatcheries have been raising tiger trout in recent months and now it is time to start stocking some of those fish.  Lake Ogallala received a stocking of relatively small tiger trout last summer, and I know for a fact that some of those fish have survived.  Just recently more of the tigers have been stocked in Blue Creek and Halsey Pit.

As you can see another thing that has made tiger trout popular is their coloration.  As with all trout, they are just darned purdy!  Although tiger trout are a sterile hybrid fish, I expect to see them most colorful around “spawning” time.  Both brown and brook trout are fall spawners in Nebraska waters–our only fish species that actually do spawn in the fall.

The few thousand tigers stocked in Lake Ogallala last summer were stocked at a size smaller than what we will usually stock.  Those fish were doing so well in the hatchery that we needed to thin out a few and those fish were stocked at a length of 4-5 inches.  We were not sure how well those smaller trout would survive, but I can confirm that at least a few of them survived very well.  My son and I caught a bunch of them this fall along with our usual catch of rainbows from Lake Ogallala and associated waters.  I cannot say they were any more or less aggressive than the rainbows; we caught them all on the same presentations at the same time. Those fish have been growing, but the size potential of tiger trout is a lot more than that.  World records for tiger trout range all the way up to 20 pounds!  Those may be the first tigers we have caught and released, but we are planning to catch more in the future, and we will be expecting fish a lot bigger! 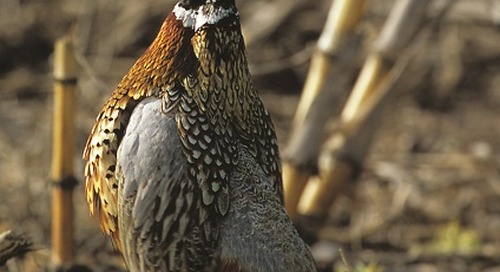 Preparing for the Season of Love

With days getting longer Nebraska wildlife are getting ready for a very important part of the year right no... 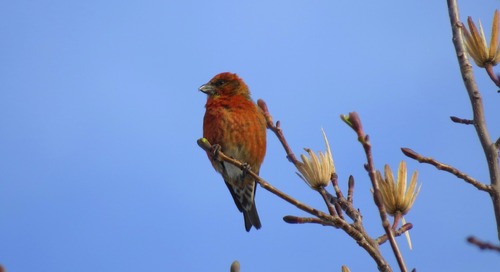 Seeing the elusive Pine Grosbeak – thanks to a lot of help

The Pine Grosbeak is a large finch that inhabits boreal forests of the far north and Rocky Mountains.   It ...