I have a movie that I can’t wait to see. No, it’s not Star Wars. I’m  not a sci-fi guy. I’m a realist. I’m an outdoor guy into the history of the American west and that, of course, includes Nebraska.

The movie that I am so anxious to see is The Revenant starring Leonardo DiCaprio as the 19th century frontiersman and fur trapper Hugh Glass.

The Revenant, which opens in theaters on January 8, 2016, is based on the true saga of 1800s frontiersman and fur trapper Hugh Glass (Leonardo DiCaprio). Glass was left for dead in the harsh conditions of the uncharted American wilderness for weeks, beginning in late August of 1823. If you’re wondering, “revenant” is someone who returns from the dead.

While exploring and looking for a way to reach rich beaver trapping streams, Glass (DiCaprio) sustains severe injuries from a brutal grizzly bear attack. When his hunting party decides to leave him for dead, Glass must utilize his survival skills to find a way back home to his beloved family. He endures unthinkable grief with the murder of his young Native-American son as well as the betrayal and abandonment of his confidants John Fitzgerald (Tom Hardy), a seasoned trapper, and a young frontiersman, Jim Bridger (Will Poulter). Guided by sheer will, the love of his family and extreme vengeance, Glass navigates a vicious winter in a relentless pursuit to live and find redemption.

Along the way, he contends daily with the threat of Native American tribes turned warlike over the white men’s encroachment on their land, and other prairie foes―like its challenging and sometimes unforgiving landscape, weather and wildlife.

This film had a notoriously long and difficult shoot in snowy Canada and Argentina, according to an article written by Kim Masters of The Hollywood Reporter.

She said crew defections, brutal cold, a global search for snow and even a naked actor dragged on the ground made filming very difficult. “The conditions were necessary to communicate the experience,” stated cinematographer, Emmanuel Lubezki, in the article. “We wanted to make a movie that was immersive and visceral,” he emphasized. “The idea of using natural light came because we wanted the audience to feel, I hope, that this stuff is really happening.”

In that same article, The Revenant Director, Alejandro G. Inarritu, responded to the critics of his ambitious methods: “When you see the film, you will see the scale of it. And you will say, ‘Wow.'”

It sure was a tough film for DiCaprio to make. In an interview with Julie Miller of Vanity Fair, DiCaprio was quoted as saying:  “I can name 30 or 40 sequences that were some of the most difficult things I’ve ever had to do. Whether it was going in and out of frozen rivers, or sleeping in animal carcasses, or what I ate on set (raw bison liver). DiCaprio also mentioned that he “got the flu quite a few times” because of the cold, wet, hypothermia-caliber weather conditions he had to undergo.

There are Nebraska ties to Hugh Glass – the Platte and Missouri Rivers as well as Fort Atkinson State Historical Park.

I don’t want to say much else about our Nebraska connections to the legendary mountain man otherwise I may spoil the outcome of the movie for you!

All things considered, I believe The Revenant will be a must-see movie and a gripping epic. Check out the movie trailer below and judge for yourself.

See you in the theater. Pass the popcorn, please!

The post The Revenant appeared first on NEBRASKALand Magazine. 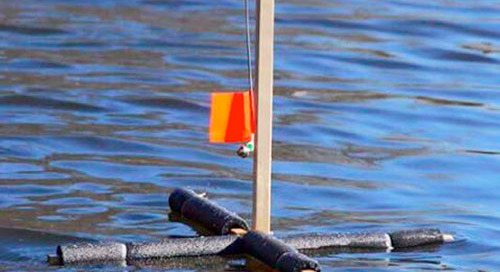 Most years, I would have posted my obligatory reminder about ice safety by now.  With the mild weather we h...

LINCOLN – The Nebraska Game and Parks Commission would like to remind big game hunters that the link to the...