LINCOLN – Nebraska’s outdoors in the winter can be just as much fun as the other seasons. Whether it’s hunting, ice fishing, cross country skiing, sledding or snowshoeing, the state has great outdoor opportunities.

Being outdoors in the winter also means being safe in the coldest of temperatures. Avoiding hypothermia is critical. Hypothermia is a low body temperature most often caused by exposure to cold weather or immersion in a cold body of water. Left untreated, hypothermia can lead to complete failure of the heart and respiratory system and to death. Primary treatments for hypothermia are methods to warm the body back to a normal temperature.

The Nebraska Game and Parks Commission suggests hunters, anglers and other outdoor enthusiasts dress warmly in layers of clothing that may be added or removed as necessary. Warm hats, gloves or mittens and boots will prevent heat loss through the top of the head, hands and feet. Anglers should wear a life vest on the ice.

Hypothermia can affect judgment, which is critical to hunters handling loaded firearms and anglers venturing onto potentially unsafe ice.

Symptoms of moderate to severe hypothermia include:

LINCOLN – Spring turkey hunting permits will be available from the Nebraska Game and Parks Commission start... 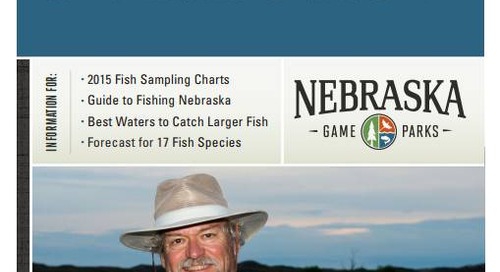 First blog post after getting back in the office for the new year.  I want to make quick mention of a coupl...