Home » NEBRASKAland Magazine » Sowbelly on the Rise
× Share this Article

My NEBRASKAland magazine duties are a little different than other types of journalism I’ve experienced during my career. With the bulk of the content for our magazine’s print edition being created a year in advance and stories going to press far ahead of each edition’s designated month, it doesn’t leave much room for “last-minute” changes. We all know conditions in Nebraska are susceptible to the whims of Mother Nature. For instance, a photo spread I produced titled “A Short Fall,” pretty much guaranteed that we’d have a long one that year – and we did, to the joy of most of our readers.

That thought leads me to an article I wrote for a summer installment of our print edition’s monthly “Travelogue” feature, which put Sioux County and many of its great attractions in the spotlight. The issue had already been composed and sent to the printers when Sioux County experienced heavy flooding through many of its Pine Ridge areas – among them was Coffee Park in Sowbelly Canyon, one of the sites I featured in the article. Because of the damage, the park has been closed since.

Regardless of my promotional piece’s poor timing, the magnificence of Sowbelly Canyon and other natural attributes in that region are certainly worth some words. It’s one of the most remarkable places in the state.

While most of the land along the canyon’s 11-mile drive is private property, Coffee Park is owned and maintained by the village of Harrison for the public to enjoy. It isn’t what you’d call big and fancy. It does, however, feature access to picturesque Sowbelly Creek and its trout, along with playground equipment, vault toilets and picnic shelters. Bighorn sheep often scamper on the buttes above. And perhaps best of all, there’s not much traffic.

So, I was glad to write a news release this week about the recent clean-up efforts at Coffee Park, which are ensuring that it will be back in operation and better than ever in the spring. Matt Steffl, a district wildlife manager for the Game and Parks Commission, is hesitant to take much credit for his role in the effort — a partnership between local, state and federal entities — but everyone in Sioux County I’ve talked to about the project says it wouldn’t have happened without him. He’s passionate for the cause and has been heavily involved.

“We don’t have a lot of miles of public cold-water trout streams in Nebraska, so we like to do what we can to take care of what we have,” Steffl said in the release. “When the work is done here, we expect it to be even more of an attraction. When that flood went through, it washed out a lot of the ash from the ’06 wildfires and also cut some holes here and there. In most places, it made a lot better cold-water stream than what we had before.”

Earlier this week, with the purrs of a big excavator and skid loader moving debris in the background, I

walked along the creek watching trout swimming between rock-bottomed shallows and the deep pools that were carved by the flood. In the same way the water was stirred from those rocks, the clean-up efforts further down the creek stirred my imagination for days to come – in particular, a warm spring day when I’ll be carrying a fishing rod.

Yes, “Lord willing and the creek don’t rise,” I’ll be returning to Coffee Park to make those visions a reality. I hope you, too, can heed the advice from that long-ago published travelogue article in NEBRASKAland and visit Coffee Park and the other timeless attractions of Sioux County.

The post Sowbelly on the Rise appeared first on NEBRASKALand Magazine. 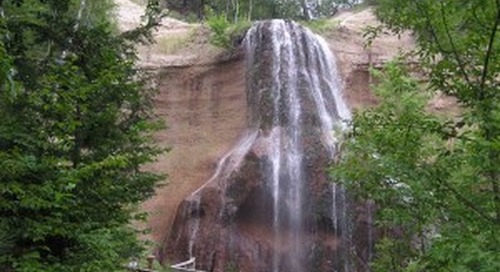 When you blog, sometimes the strangest things happen. I still find it hard to believe that a blog I did abo... 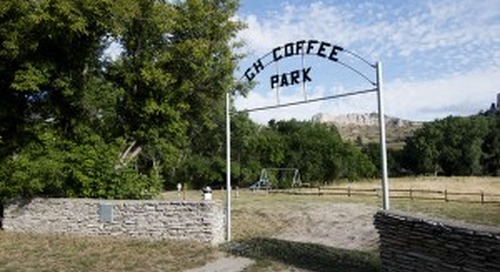 The effects of torrential spring flooding has dampened activity at Harrison’s Coffee Park for months, but t...