Admittedly I do not get out and do a whole lot of field work anymore, but once in awhile “the guys” need some help, and when they are desperate they give me a call.  A couple of weeks ago I got to slip out to Lake Wanahoo to help with the northern pike tagging again this spring.

For those of you who may not be familiar with the pike tagging at Lake Wanahoo, I will not go into all the details here.  I just want to show some pictures and let you know some of the work our fisheries biologists are doing again this spring.  Please, if you want to know more about the pike tagging, you can learn all about it, even watch a video, here, Piking, and here, Got Another One!

Pike are called “northern” pike for a reason.  They definitely are a cool-water fish whose native range likely extended only as far south as north-central Nebraska.  Pike spawn in early spring, typically right after ice-out in Nebraska, but with a late ice-out they will start spawning under the ice.  On the other hand, we have had an early ice-out this year and mild early spring weather, and the pike certainly headed to their spawning habitats right after ice-out (actually, they start that move under the ice every winter).  Even with the relatively warm weather, actual spawning this year has been about the same time it always has been.

That means fisheries biologist can set nets in March in areas of shallow, marshy habitat which northern pike utilize for spawning.  The nets used to capture pike are frame nets, or if you wish you can call them trap nets or fyke nets.  Fish are funneled into those nets and eventually become trapped in the holding portion, “cod end”, of the net.  The fish swim around alive, in the net, until pointy-headed fisheries biologists show up and pull ’em in! Obviously, I was goofing off taking pictures while the guys were doing the hard work of pulling up the net (maybe that is why they do not ask me to come help very often?).  My job was to untie the end of the net and dump the fish into a large holding tank on the boat. For this work, any “by-catch”, other species of fish caught in the nets, were immediately released.  We only wanted pike.

After several years of tagging, many of the pike already have tags.  Those fish were measured and tag numbers were recorded. Very lively pike from cold water are strong, slimy, and find ways to squirm off the measuring board.  A couple, three pairs of hands were needed to keep the fish from flopping around.  We were almost diving on the biggest fish like we were wrestling crocs!

The tags are supposed to be coated to keep them from being covered with algae.  It does not work.

Fish that were untagged were also measured and then tagged. Fish were released immediately and then on to the next net!  We ran 30 frame nets.  There were two boats, with two full crews, and we made quick work of it.  The nets were re-set right after dumping the fish out of them.  The day I assisted was the first day the nets were pulled; tagging efforts continued for several more days after that.  Out of the 30 frame nets we collected 58 pike (assuming my memory is right).

Catch rates picked up considerably in the days after I helped, and they caught hundreds of pike each day.  As I said earlier, from what we saw on the day I was out, the pike spawn was just getting started; catch rates increased as spawning activity picked up in the following days.  As I write this, peak pike spawning activity has probably passed on Lake Wanahoo.

OK, I am fully aware of what most of you want to know–How big?  What was the biggest fish you saw?

I always answer that question by telling folks that fisheries biologists are NOT necessarily trying to collect the largest specimens.  Our goal is almost always to collect representative samples of all sizes of fish in a population.  If you want to know the largest fish present, anglers are more likely to collect the very biggest fish because anglers select for big fish!  However, when you handle hundreds, thousands of fish, you see a whole range of sizes.

When doing spring collections on the spawning habitat, you will capture adult fish.  We did NOT sample any of the small, young, immature pike during the Wanahoo tagging collections of the past few weeks.  We did sample a lot of adult male pike in the mid-20-inch to mid-30-inch range.  We did sample adult females larger than that, some a lot larger, up to 40 inches or so. Anglers, remember that all pike caught at Lake Wanahoo must be released.  We want that pike fishery to be as good as possible for as long as possible.  However, that does not mean that we do not want reports of tagged fish if you catch them!  If you catch a tagged pike at Wanahoo, read the tag number off the tag, get a measurement of the length of the fish if possible, and then release the fish with the tag still attached.  If you wish, you can report tagged fish to me and I will forward that information to the appropriate biologist, daryl.bauer@nebraska.gov.

After helping with the pike tagging at Wanahoo, my family and I were back there a couple days later.  We observed a couple of anglers who caught a very nice pike, mid- to upper-30-inch fish.  It was tagged, and was released after pictures were taken, but I am betting the anglers did not even realize it was tagged.  Look for the tags near the dorsal fin, they are an orangish-color, but likely they will look like a green piece of spaghetti–most of the tags are covered with algae.

LINCOLN – A nationwide panel of energy, business and conservation leaders on March 2 released its recommend... 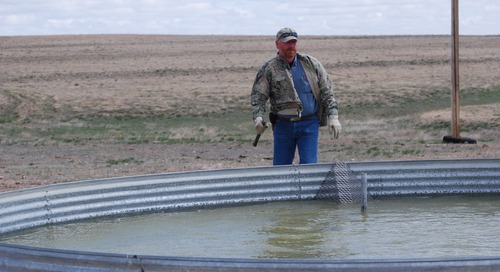 Hats off to Larry Snyder

It is always positive when one of the good guys (or gals) gets some recognition.   A few days ago there was...