Pretty sure I am not alone in this arena.  I think its a trait of many hunters, trappers and outdoor enthusiasts in general.  We have a curiosity to know just what is happening when we are not there.  We are driven by a deep desire to know what wildlife travel the same wild areas that we do.

Now I can think of just two options that address this inquisitiveness.  The first, simply never leave.  (Ok, it’s not a great option.)  The second, and my preferred, option is the trail cam.

The trail cam – or scouting/game camera as its sometime called – has been around for much longer than you might think.  Many credit wildlife photographer George Shiras as being the first to set camera-traps in the 1880’s when he wanted to catch photos of wildlife when he wasn’t around.  However, its only been the last couple of decades that these things have become a common tool for hunters, trappers and all-round wildlife enthusiasts.

When setup correctly the trail cam gives you a small glimpse of what may be using a specific trail or spot in your absence.  If setup incorrectly, such as pointed perpendicular to a deer trail, they give you a picture of the same scenery over and over – and maybe the tail of the animal that triggered it.

Getting the cam set in the best location can be a challenge.  You need to think like the critters you are after and get it setup facing an area you expect the animal to appear hours – sometimes days – after you leave.   Not to mention it has to be close enough to be triggered by that animal and at the right height (or angle) to get the entire animal.  Heck, sometimes it feels as if there are as many things to think about when putting the camera out as there is in hunting.  However, time is on your side and you can leave it out for days or weeks – until the batteries die or the SD card fills up.

Like many deer hunters, I’ve been messing around with these trail cameras for quite sometime.  At first it was strictly with deer in mind .  But now I am having fun setting them out for all sorts of wildlife.  And I still get excited to check what my cameras might have caught sneaking around.  From bobcats to wild turkey, the more pictures I get the more my enthusiasm builds.  My craving to know what shares these Nebraska wild places with me is being fed – but my appetite isn’t yet satisfied. 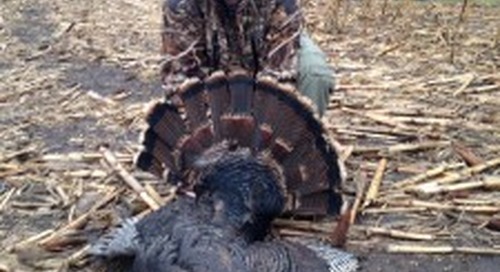 I really hope that is not something we have to say in the coming years but to tell you the truth…it is not ...