Seeing the elusive Pine Grosbeak – thanks to a lot of help

The Pine Grosbeak is a large finch that inhabits boreal forests of the far north and Rocky Mountains.   It rarely ventures to Nebraska.  Over the last 30 years, this species has only been reported in our state about a half dozen times.  It is a species I was not sure whether I would ever see in the state.  However, the odds improved when Ben Heppner discovered an immature/female type Pine Grosbeak at Forest Lawn Cemetery on the north side of Omaha on 18 December.   Like many other birders, I chased the grosbeak.  Like many other birders, I failed to find it.   Only a few lucky birders had luck locating the bird.  After a few weeks of no new sightings, it seemed the Pine Grosbeak moved on.  On 22 January, Justin Rink rediscovered the elusive bird – reigniting hope it could still be seen if a person had luck on their side.   A few days later, Robert Manning found it (on his 15th attempt!) late in the day and made some interesting observations which gave some hope the bird’s habits had some level of predictability.

Last Friday afternoon the weather was great, so I drove up to Forest Lawn Cemetery to try my luck.  I hung around for a couple hours.  I saw quite a few birds, including a nice group of 13 Red Crossbills, but no Pine Grosbeak.  At about 4:45 PM, I called it a day.   On my way out, I drove by Robert Manning and his sons, Joseph and Sam.  After I got home, they reported finding the Grosbeak at 5:15.  Dang it! I bugged out too soon!  However, the Mannings made some additional observations indicating they located the precise tree where the bird came into roost each evening.   Saturday was again a nice day, so Melissa Panella and I ventured back up to Forest Lawn Cemetery in the late afternoon.  Robert and Joe Manning, Brian Peterson, and Clem Klaphake were there as well.  Collectively, we searched the area near the apparent roost tree.   At about 5:10, I heard and then saw the Pine Grosbeak sitting at the top of the tree.

I yelled out and everyone got on the bird. It posed for about 15 minutes and even though it was a little bit dark out, everyone got good looks.  Then, it flew over to the roost tree, a dense spruce, and disappeared in the foliage.   Some brief video of the bird is below.

For me to end up seeing this bird depended on a lot of help from other birders.  Prior to Robert Manning figuring out this birds’ evening routine, there was little rhyme or reason for where and when it could be found.   Thanks to all of the birders who contributed to unraveling the mystery of how to find this one Pine Grosbeak spending the winter in Omaha, particularly since this was state bird #400 for me and it remains unknown whether I will have another chance to see this bird in the state!

The post Seeing the elusive Pine Grosbeak – thanks to a lot of help appeared first on NEBRASKALand Magazine. 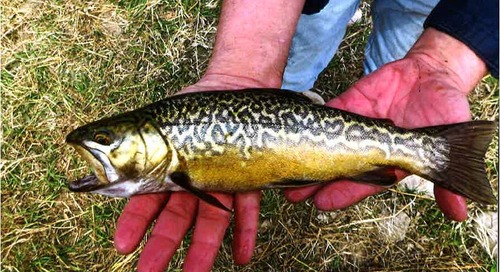 Alleged sightings of mountain loins tend to cause a hysteria in some parts. . . . In the future, Nebraska a...