As we move into late fall and winter more and more bird feeders will be put up and filled with seed.  As birds concentrate at feeders they are susceptible to an ambush from one raptor species lurking in suburban environments.    Cooper’s Hawk are a species of accipiter, a type of hawk.  Cooper’s Hawks have long tails and rounded wings which allows them to maneuver around obstacles with ease.  Cooper’s Hawks are birds of open woodlands and the obstacles they typically weave through are tree branches and trunks.   Since suburbia resembles an open woodland, Cooper’s Hawks are at home there and have actually increased in this human dominated setting in recent years.  With these birds in our midst, people see them more and more.  Mike Darbro from Central City recently sent me a series of photos of a juvenile Cooper’s Hawk near his feeders playing with a captured House Sparrow.  While it is not pleasant to see any animal suffer, the photos are compelling and require little interpretation.   Thanks to Mike Darbro for allowing me to share them on this blog. Again, this is a young Cooper’s Hawk.  His or her playfulness is probably because of youth and the need and desire to hone his hunting skills.  Cooper’s Hawks I have observed catching a bird typically are all business and quickly begin consuming their prey.

If you see a hawk ambush birds at your feeder this winter, chances are good it will also be a Cooper’s Hawk. Many thanks to Mike Darbro for sharing and allowing me to share his photos on this blog. 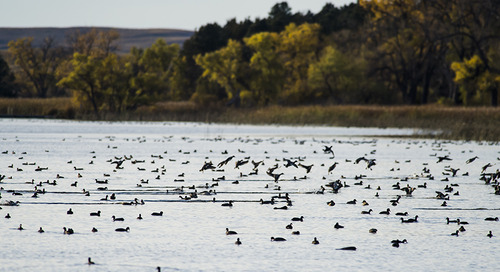 The Fall before the Ice

My ice-scraper went to work this week for the first time in months. Some may lament this annual milestone a...