Winter has now settled in and while cold temperatures may dissuade some birders from getting out, those that do are sometimes rewarded in a big way.  Cara Smithson was out photographing raptorsjust across the Missouri River from north Omaha in western Iowa on Tuesday (12 January) when she came across an adult Peregrine Falcon.  The falcon was very accommodating and allowed Cara to capture some great photos of the bird and also the bands it was sporting.  A few of Cara’s photos are below.

Since the photos are excellent, the alphanumeric color band can be easily read.  It is black over read with the letter “D” over the number “43”.   A quick look into our records indicates this is a bird hatched and banded at the Woodmen Building in Omaha in 2014.  It was given the name “Elsa”.   All the names given to the Woodmen eyases that year had a Frozen theme (the movie, not the physical state).   Below is a photo from the Woodmen banding in 2014.  One of the four white fluffballs was Elsa on 22 May of that year. The re-sighting of Elsa also has a Capitol connection.   Mintaka, who hatched at the Capitol in 2010, has been the reigning male at the Woodmen since 2012 and therefore sired Elsa in 2014.   Thus, Elsa is the “granddaughter” of Ally and 19/k, who comprise the pair present at the Capitol since 2005.

It is interesting to note that the re-sighting of an adult Elsa is not far, only about 10 miles or so, from her natal site at the Woodmen Building.  We are reminded by recent news from Texas that these falcons can and will travel far from hatching site on their peregrinations.  Even so, it is always great to receive news about a re-sighting.

Many thanks to Cara Smithson for sharing her excellent photos of Elsa! 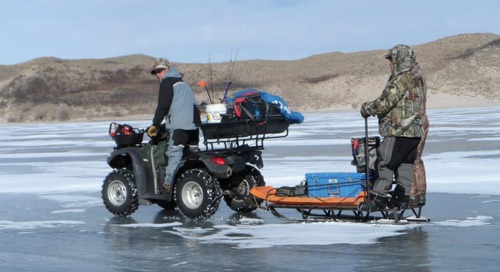 I do not own a snowmobile or ATV, have ridden on a few on the ice, but not a lot.  I do know this, a person...