Home » NEBRASKAland Magazine » Ode to the Season Past
× Share this Article

Ode to the Season Past

My ice fishing season ended in literally a week this year; we were on 13+ inches of hard ice, and a week later it was not safe.  It was much too short.  My son and I were left with a feeling of unfulfillment–we needed just one more trip, just one more big fish.  I suppose you could say we have that feeling at the end of every ice season, but we felt it even more this year.

I have not shared any recent photos or reports of our ice adventures; let me pay homage to the passing of Ice Season 2016 with just a few pictures and words.

I know others caught more and larger pike from Wanahoo than my kids and I.  Oh, the bluegills and crappies were easy, drill a hole, sit down, catch fish, but we have had much better success on the pike in previous winters.  I am not exactly sure why we struggled with Wanahoo pike this winter.  I have some ideas, but I guess they will have to wait to next winter. My son did jig one up on one of our last trips. None of the pike we caught this winter were very large.  I know some folks caught fish a lot bigger than we did, and I know we caught a lot larger pike in past ice seasons.  But, that last one Daniel caught had a tag in it. It was the bicentennial pike, #1976.  Here is the information on that particular fish: You can see that pike, almost certainly a male, had quite a history.  It was 26 inches when my son caught it in February.  If you want to know more about the pike tagging project at Lake Wanahoo, Piking, Got Another One!

By far the highlight of my ice season was a crappie, happened to be my “personal best” crappie.  Most of my best panfish, bluegill, perch, crappie have come through an ice hole.  This one was caught from an interstate lake, yep, public water.  With fishing pressure and a few other reasons, I consider big crappies from public waters to be one of the rarest fish in Nebraska.  I have found a number of interstate lakes over the years that tend to have just a handful of crappies in them, but in those pits with only a few crappies, they usually are some big specimens.

I knew this particular interstate lake was that way; that I was not going to catch a lot of fish, but that I would have a chance at a big crappie.  So when I had an opportunity to fish it, I tried to be there at “prime time”, late afternoon through dark.  My strategy was to be mobile and fish aggressive.  Crappies are predators too, especially big crappies, so I tried to keep drilling, keep moving, keep jigging.  I just wanted one big crappie to come eat.

Sometime just after sunset, on about the 33rd hole, I glanced down at my old Hummingbird depth-finder and there was a fish on my bait.  Initially, it did not hit, so I gave the bait a little lift, just enough for it to wobble a bit, dropped, “thunk”, FISH ON!  Now I expected to catch some bass in addition to maybe a big crappie, so my heart rate quickened when I saw the flash of a garbage-can-lid-size crappie under the ice!  You know it is a big crappie when you have to give it line, but I was able to keep it hooked, into the hole and then reached over and pulled it out onto the ice!  BEAUTIFUL! The light was fading and with the timer on my camera this photo is a little blurry, but it is one I will stare at frequently in the coming months.

We attempted one last trip, the ice looked fine, but a few blows with the spud bar and we knew it was over.

That is enough.  No time to wax poetic about the passing of our ice-fishing season.  Now, we have open water and it is time to GO FISH!

The post Ode to the Season Past appeared first on NEBRASKALand Magazine. 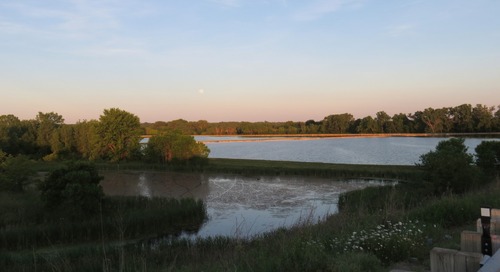 In praise of sewage lagoons

Birders go places to find and see birds.  It doesn’t really matter what or where the place is, as long as t... 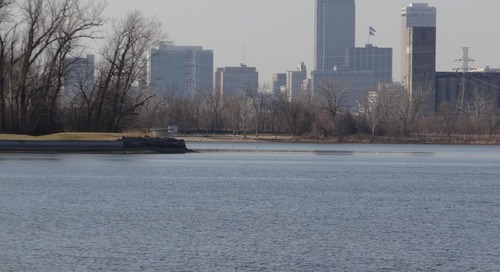 March Means Migration Near You (Even in the City)

When I was kid, I always looked forward to taking a drive with my grandparents during the March thaw to see...