Home » NEBRASKAland Magazine » “My What Big Teeth You Have!”
× Share this Article

“My What Big Teeth You Have!”

I love big predator fish.  Duh.  Of course part of that comes from the fact that they are just plain big fish, and what angler does not love big fish?  But, it is more than that.  I marvel at the big predator fish in particular because there is such raw power and mystique about them.  It is the same reason I believe that mink, bobcats, coyotes, wolverines, mountain lions, and great whites are such cool creatures.  There is a pure, untamed wildness about them and about the places where they are found.  That is where I want to be.

There is no greater demonstration of the awesomeness of one of those large predator fish than looking down the business end. If you fish, you love seeing your bait in the mouth of one of those big toothy predators.  And, you know that you better be using a leader of some type if you want to land a big pike or muskie instead of having a sad story about “the one that sliced your line and got away”.

But wait a minute, walleyes have mouths full of sharp teeth too! Now, right here I would like to show you the photomicrograph I have of a muskie tooth and a walleye tooth.  Take one look at that image and you will know why you do not need a leader for walleyes.  I cannot show you that image, because I do not know whose image it is or if they would allow its use.  I have seen it, seen it on this ole interwebby thing.  A picture is worth a thousand words so if you want to see what I am talking about go to this online forum, baitshopboyz.  Scroll down a ways and you will see the photomicrograph I am talking about.  I suspect that photo was taken from another source and put in that forum; I think it may be from the Hunting and Fishing Library by Dick Sternberg, the volume on Northern Pike and Muskie, but I do not have immediate access to one of those books to confirm that.

In my office, I have a lower jaw of a big pike that was found on the shoreline of Red Willow Reservoir.  If you look really close at the teeth, you can kind of see what I am talking about. Believe me, those teeth are sharp.  I have the scars to prove it.

While on the subject of Esocid teeth (“Esocid” refers to the Pike family, pike, muskies, pickerel), those predators can lose their teeth, it can happen frequently while they are feeding.  Lost teeth will be replaced.  If you have heard the old tale about the pike not biting at a certain time because they somehow shed all their teeth and then re-grow them, that is completely BALONEY.  It is just another excuse some old fisherman cooked up to explain why he got skunked (we all know it couldn’t have been the fisherman!).

I have another book on one of my book shelves, Managing Muskies.  It is a compilation of papers presented at the first ever Muskie Symposium hosted by the American Fisheries Society and Muskies Inc. back in 1984.  The second paper in that compilation is titled “Identification of Muskellunge, Northern Pike and their Hybrids”.  That paper was written by J. M. Casselman, E. J. Crossman, P. E. Ihssen, J.D. Reist, and H. E. Booke.  The first two authors, Casselman and Crossman are THE experts on muskellunge and other Esocids.  As the title suggests, there are many different characteristics that can be used to identify Muskellunge, Northern Pike and their hybrid, Tiger Muskie.  One of those characteristics is the teeth!  There are differences between pike teeth and muskie teeth, and of course the hybrids exhibit intermediate characteristics between the two parent species.

For example, there is a huge difference in the arrangement of vomer teeth on the roof of the mouth of muskies and pike.  Again, I would love to show you the photo on page 33 of Managing Muskies to illustrate that, but I better not steal that from them to show here.  There are even differences in the shape and cross-section of muskie and pike teeth.

Now you know why I say us fish biologists are pointy-headed nerds.  Who would have thought there were specialists in Esocid dentistry?  I can tell you about specialists Ictalurid proctology too, or even Cyprinid urology, but those are stories for another time.

OK, enough rambling, how about some on-the-water practical application?  If you are fishing waters where a “big toothy”, a pike or muskie, are a possibility, I believe you should be responsible and fish with leaders of some type, EVEN IF YOU ARE NOT FISHING FOR PIKE OR MUSKIES!  We all know that a pike or muskie will readily grab most of the baits used for bass, walleyes and other predator fish, and if that might happen, be prepared for it!  First of all, it will give you a chance to land a really big fish, and secondly, it potentially will save some pike or muskie from perishing because of a bait lodged in its mouth or throat that some angler could have removed if they were simply using a leader and landed the fish.

Think the leaders will cost you fish?  That you will catch less bass or walleyes or ____________ (fill in the blank) because you were using a leader of some type?  Well, if you are using those old, primitive silver steel leaders, that may be the case (5 Things You Can Live Without).  But, there are A LOT better options on the market now.  Fluorocarbon line is relatively abrasion-resistant.  Unless you go to very heavy, 40-pound test or heavier, fluorocarbon, it will not eliminate break-offs from pike and muskie, but even a 20-pound fluoro leader will at least give you a chance of landing an incidental big toothy.  Oh, and fluorocarbon has the same refractive index as water, so it is nearly invisible in water, and its abrasion-resistance is really nice for other reasons too.  I use fluorocarbon leaders for a lot of different fishing situations, not just for preventing a pike or muskie from slicing me off.

Or invest in some of the new, improved steel leader materials on the market now.  Surflon Micro Supreme is a wire leader material that is very flexible, as flexible as heavy monofilament or fluorocarbon, relatively thin, and very “camouflaged”.  It is so flexible that you can tie knots in it, you can use some of the same knots you use for other fishing situations.  Yes, the Micro Supreme will cost you a little bit of $$, but it is leader material!  All you need is enough to make some leaders!  I use it religiously. The post “My What Big Teeth You Have!” appeared first on NEBRASKALand Magazine. 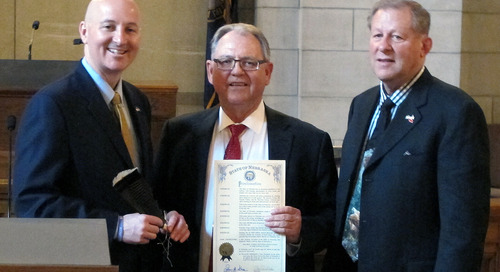 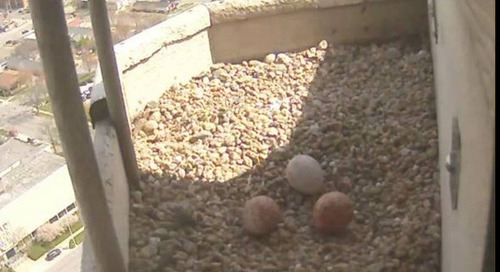 As expected, the female Peregrine Falcon laid egg #3 midday Tuesday. A fourth egg, if there is to be one, s...