LINCOLN – Nebraska Game and Parks Commission officials confirmed a weekend sighting of a moose within the city limits of North Platte.

The moose had been in the area for about a month before being spotted in town on Dec. 13, according to officials. Game and Parks biologists are communicating with local law enforcement about the moose’s whereabouts. If the opportunity presents itself, officials will attempt to direct the moose out of town.

Officials stress that people should not approach the moose to take pictures or attempt to feed it as they have been known to become aggressive toward people and pets.

Aggressive moose often show a variety of signs, including pinned back or flattened ears with hair raised around the neck and back. Other signs are a lowered head, stomping feet and teeth clicking or licking of its lips. In the case of a moose charging, people are encouraged to run and not stand their ground.

LINCOLN – The Nebraska Game and Parks Commission is conducting a survey of Nebraska deer hunters Dec. 14 – ... 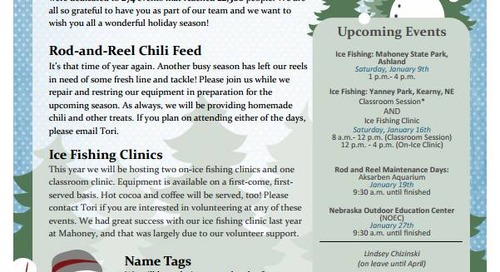 Here is the recent youth fishing instructor newsletter,  And if you want to see a version with better defin...