Pumpkin patch goers and Goldilocks have one thing in common: everything has to be just right. Because of this, choosing the right pumpkin can be quite a task. Story and photos by Sarah Kocher

Imagine, then, trying to grow enough perfect pumpkins for hundreds of patch guests.

As a strictly October squash, commercial pumpkins are 10 months of work for two months of payoff. As soon as one Halloween is over, the next is already on the radar.

According to Helgoth’s Pumpkin Patch owner and grower Chuck Helgoth, the winter is spent ordering seed for the next year. At Helgoth’s, located in Saint Libory, Nebraska, this includes ordering 28 varieties of pumpkins, including eight standard varieties as well as 20 “ornamentals,” ranging in color, size and shape. Seeds cost the Helgoths between $150-200 per acre.

The ground is prepared for these seeds in May, and soil samples are taken to ensure its composition is good for pumpkins. Like any plant, the pumpkin requires a certain soil pH to grow properly, and fertilizer is used to bring the soil closer to a point that pleases pumpkins– this is usually between 6 and 7, a fairly neutral pH.

“You’ve got to treat it kind of like a corn crop,” Helgoth says. “We don’t just throw the seed around and walk away.”

The Helgoths plant in May and run through the first week of June. Connie Hintz, owner of Poppy’s Pumpkin Patch in Norfolk, Nebraska, plants several different times during the spring window. After all, with such a relatively short and specifically defined period of time in which to sell the product, the pumpkins need to be ready at different intervals. Plant them all too early, and they’ll spoil before Halloween. Plant them all too late, and the customers will have to choose between green and greener pumpkin preemies. With an even spread, the pumpkins can mature at different times, offering patch customers ripe pumpkins throughout the duration of the fall season.

July and August are maintenance months: for the Helgoths, this means spraying the pumpkins with fungicides and bug sprays, fertilizing them, weeding the fields and irrigating. Hintz and her family mow and weed, as well as hoe their eight acres by hand. When September and October roll around, the vines dry and the patches open for customers to snip off and take home tokens of 10 months of work.

It’s not all vines and easy times, though. Both the Helgoths and Hintzs grow pumpkins in three separate fields to ensure that hail doesn’t damage the entire crop. Additionally, the sheer manpower of growing pumpkins can be a challenge.

“Every one gets clipped by hand,” Connie said. The stems have to be just right, so each pumpkin must receive individual attention when it’s time to cut them off and haul them to the patch– a job that also takes serious effort.

Finally, there’s the competition factor—not between humans and humans, but between humans and crows, raccoons and cows. The cows, perhaps, come out on top; according to Hintz’s grandson and worker Jared, when the crows and raccoons ruin the pumpkins for sale, the cows get the leftovers.

Eventually, though, pumpkin season arrives, as it has now, and we will have plenty to choose from. Hintz cultivates eight acres of pumpkins, and Helgoths have a 40-acre spread which, in a good year, yields 20,000 pounds of pumpkins per acre.

If you’re doing it right, you’ll choose one that’s firm and solid, with a stem that’s thick, green, and sturdy. If you’re in it for a jack-o-lantern, don’t buy it too early, and don’t park it on the cement—the pumpkin will suck up the moisture housed in the concrete and rot faster.

For the Goldilockses of pumpkin pickers, the effort required for the perfect pumpkin is worth it. The same is true for the Helgoths and the Hintzs: growing pumpkins is a labor of love and, in the end, it can’t be squashed.

Sarah Kocher is a NEBRASKAland contributing writer born and raised in Lincoln, Nebraska. Her sense of outdoor adventure was cultivated on fishing trips with her mother in search of the state-record perch, on family road trips, and in lab time for environmental science classes. She is working toward her bachelor’s degrees in English and journalism at Augustana College in Sioux Falls, South Dakota, and finds that the school’s major flaw is that it is not in Nebraska. 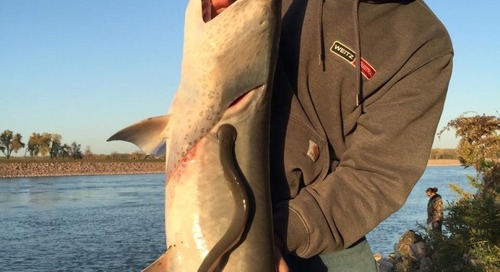 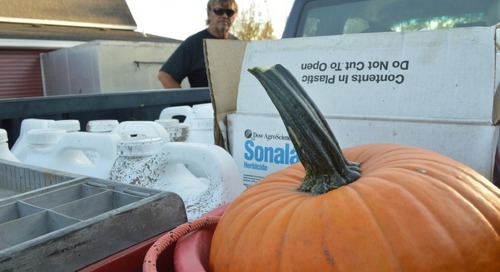 Pumpkin patch goers and Goldilocks have one thing in common: everything has to be just right. Because of th...