LINCOLN – The Nebraska Game and Parks Commission reviewed a draft of a comprehensive pheasant management plan at its meeting Feb. 25 at Pheasant Bonanza Hunt Club and Kennel north of Tekamah. The Commission approved the concept of the proposed plan and will refine it.

The objective of the draft Nebraska Mega Plan is to produce the best pheasant hunting experiences for the most people over the next five years.

The plan’s goals are to increase pheasant abundance, increase the pool of potential pheasant hunters and access to land holding pheasants, manage hunters’ expectations, and improve the funding and policy environment related to pheasant management.

Eight multi-county areas were selected within the state to focus efforts for habitat management and hunter access. Those areas are within the northern Panhandle, southern Panhandle, central Platte River, northeast, southeast, south central, southwest, and central parts of Nebraska, and the plan details desired improvements on both public and private lands in each area. Beyond the significant contributions needed from the U.S. Department of Agriculture’s conservation programs, full implementation of the habitat and hunter access improvements identified for all areas would require an additional $5.9 million annually for the next five years.

Since their introduction to Nebraska around 1900, pheasants have become a fixture of the state’s agricultural landscape and cultural heritage. Population levels have ebbed and flowed with changing farming practices, often driven by federal farm policies. Current policies, along with more efficient farming practices, have created substantial challenges to providing consistently good pheasant hunting in many Nebraska landscapes, particularly where wheat and other small grains are no longer part of crop rotations. The measures described in the plan are necessary if pheasant hunters are to have satisfying experiences in these landscapes and remain satisfied in our current pheasant strongholds.

In other business, the commissioners approved two wildlife regulation amendments.

The other amendment makes changes to the number of auction and lottery permits offered each year for big game species.

— to increase the Cash Change Fund from $1,000 to $1,200 at Lewis and Clark State Recreation Area to support coin requirements at campground shower buildings.

— for a permanent easement request from the U.S. Army Corps of Engineers on Middle Decatur Bend Wildlife Management Area (WMA) in Burt County. The easement will allow the Corps to complete and maintain a channel widening project, and to maintain a chute and backwater project on the WMA and adjacent Corp lands.

The Commission also heard several presentations, including a staff preview of upcoming proposals for changes to big game and waterfowl regulations. The commissioners will consider those proposals in their April meeting in Chadron.

In other business, Mike Anderson of Blair and Kathy Newberg of Lincoln spoke to the Commission about the Nebraska Horse Council’s outreach efforts to educate the public about the proper use of horse trails. They also spoke about current private/public partnerships to improve equestrian trails at state parks and other areas, the planned addition of eight horse corrals at Two Rivers State Recreation Area, and potential new trails at state park and recreation areas. 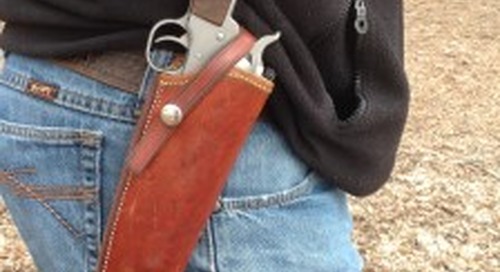 The Fun of a Trail Gun

I am a gun guy.   I shoot a lot, I reload my own ammo, I like to be outdoors and guns just go perfect with ...