LINCOLN – In 2015, a record 118 active bald eagle nests were documented in Nebraska by the Nebraska Game and Parks Commission and its partners.

Bald eagles were on federal and state endangered species lists as late as 2007 and 2008, respectively. In less than a quarter century the species has gone from a nonexistent breeding species in the state to one that is relatively numerous, according to Joel Jorgensen, Nebraska Game and Parks’ nongame bird program manager.

In the early 1980s, when federal recovery plans were written to save populations in the lower 48 states, the recovery goal for Nebraska was set at 10 breeding pairs. In 1991, Nebraska recorded its first active and successful bald eagle nest in approximately a century. In 2007, the number of nests had grown to 54 active nests. In 2015, just eight years later, this number has more than doubled to 118 active nests.

The total exceeds 2014’s record of 111 active nests even though several nests in one area of state (Missouri River in northeastern Nebraska) were not surveyed due to resource and logistical constraints. “Based on data collected in previous years, it is reasonable to conclude the number of active nests in Nebraska exceeded 125 in 2015,” Jorgensen said.

Bald eagles have a relatively slow rate of reproduction compared to other bird species. It takes about three months for a bald eagle pair to successfully nurture two or three eggs into independent young eagles. “If a bald eagle pair is experienced and lucky, they will raise two and sometimes even three eagles a year,” Jorgensen said. “Our data shows that Nebraska bald eagle pairs have produced, on average, 1.7 eagles per year.”

The most common source of nest failure in Nebraska is the nest tree blowing down, usually from winds associated with a severe thunderstorm. Unlike other species, bald eagles will not re-nest in the same year if their nest fails. “Considering all of this, and also that a number of immature and adult bald eagles die every year from various causes, we have still added about five nests each year in Nebraska,” Jorgensen said.

Jorgensen said the increase of nesting bald eagles in Nebraska has occurred over a time period when other species and natural communities have declined. He said other species have been added to the list of endangered species and others are being considered. “While broad generalizations should be taken in stride because there is always ebb and flow in nature, there is no question conservation of our state’s biodiversity is increasingly challenging,” he said. 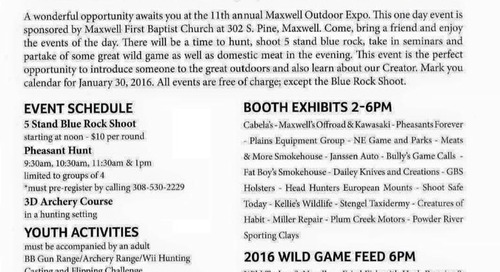 Busy time of year for me, lots of meetings, workshops, sportshows, fishing, etc., etc.  I will be hanging o...

Three Positives for CWD Found in Recent Testing of Deer

LINCOLN – The presence of chronic wasting disease (CWD) in Nebraska deer has spread eastward, according to ...