If you have followed my blog for awhile, you might remember that my family and I usually spend the long Thanksgiving weekend back home “out west”.  We spend lots of time with family, do a lot of feasting, game-playing and laughing, but also slip out to enjoy some time on the water and in the field while we are there.  The Thanksgiving weekend is a great time for us to combo up on both hunting and fishing, and this year was no exception.

The first thing we did when we got to grandma’s house was to pick up grandma and head out looking for the moose.  You may or may not know that there has been a wayward bull moose wandering Nebraska for the past several weeks.  Latest reports put it in the vicinity of grandma’s house, so we headed out scouting for him.  None of us have ever seen a moose in Nebraska before!  From the tracks and droppings in the road, it looked like the moose had headed south about 92 hours before we got there.  Who knows where he will turn up next?

My son, nephew and I slipped out for a quick pheasant hunt before the Thanksgiving feast.  We saw quite a few birds, but even with the little bit of freezing precipitation, most of them flushed a long, LONG way ahead of us.

After the turkey feast we needed a walk, so my son and I again slipped out with the shotguns.  We were a little more stealthy in the afternoon, and I managed to scratch a couple of ringnecks! If you have ever pheasant hunted with a buddy or three, you know how it seems one person gets all the shooting.  I guess Thanksgiving afternoon was my turn; all the roosters flushed in range of me and Daniel did not get any shooting.

I walked into one covey of quail too.  My shooting was much poorer when that happened.

We could have done more rooster-chasing over the weekend, but we will wait and see if we can get some snow on the ground later to make it a little easier.  We went fishing instead. . . .

Yep, it was cold, late fall/early winter, water-freezing-in-the-rod-guides cold, but there are still fish to be caught!  We headed to Lake Ogallala, trout are cold-water species and very catchable right through the winter.  I did not count every fish we caught, but we were over double figures for both of the days we fished.  We dried off a lot of 10-12-inch rainbows, but also a handful of bigger fish! I had a bigger fish, a rainbow close to, if not larger than 20 inches, that went nuts on me, eventually snagged me up and busted me off.  No matter, I will be back.

We caught a few other fish too, some others that I will only tease you with right now–some browniebrooks.  I will have more to tell you about those fish later. . . .(Yes, that is a tease to keep you reading my blog!) Looking at the long-range forecasts, I am not sure we are going to be on the ice catching fish anytime soon.  So, there may still be some open-water fishing left for this year, some more pheasant and quail hunting too, maybe some trapping, predator calling. . . . Whatever the conditions dictate, we will find something to do in Nebraska’s great outdoors! 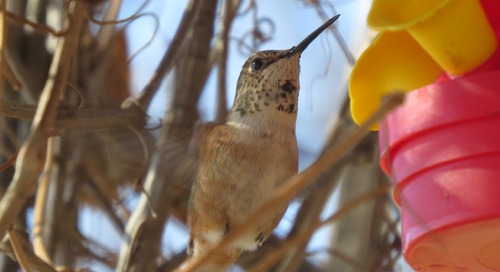 This was a quiet fall for rare hummingbirds in Nebraska, unlike other recent autumns which produced a handf...